Bizarre pig-faced shark found dead in the Mediterranean Sea. Is it real? 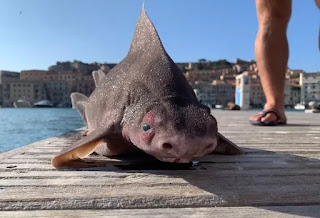 Apparently, the species is known to grunt like a hog when pulled from the water.

In the water, it looks like any other shark: a swift, gray hunter with steep dorsal fins poking out of its back. But take a close look at its face, and suddenly you're locking eyes with a real-life pig emoji.

Meet the angular roughshark (Oxynotus centrina) — better known in some harbors as the "pig fish." Naval officers in Elba (an Italian island in the Mediterranean Sea not far from Tuscany) created an online stir when they pulled one of these beauties from the water on Sept. 3, posting pictures of the snub-headed oddity on Facebook.

If the shark's flat head, wide-set eyes and blunt, pinkish snout weren't enough to earn the "pig fish" its nickname, then a single utterance from its mouth should put all doubt to rest. 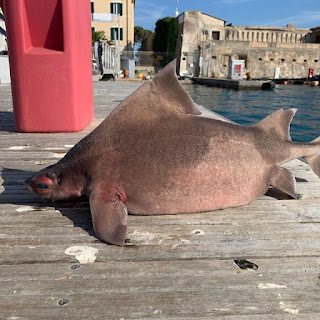 "It is commonly called a 'pig fish' because when it comes out of the water it emits a kind of grunt," Yuri Tiberto of the Elba Aquarium in Italy, told Toscana Media News following the recent discovery.

According to the Elba Island app Facebook page, naval officers found the roughshark floating dead in the water before they hauled it onto the pier. The sharks are plentiful in the Mediterranean, where their spiny dorsal fins and relatively large bodies make them vulnerable to fishing operations, according to the International Union for Conservation of Nature (IUCN) Red List of Threatened Species. Because of this, angular roughshark populations have been in decline for decades, and the species is considered vulnerable (that's one slot safer than "endangered" on the Red List's scale).

The shark also lives throughout the East Atlantic Ocean, from Norway to South Africa. They have been spotted between 200 and 2,200 feet (60 to 670 meters) below the ocean's surface, and they usually grow to be about 3.3 feet (1 m) in length, according to the IUCN.

The Mediterranean Sea has no shortage of strange sharks. In July 2019, fishers in the Mediterranean trawled up a "naked" shark — that is, a shark seemingly born with no skin or teeth. Astonishingly, the shark had lived to be 3 years old before it died in the fishers' nets. Scientists have yet to see anything else like it.