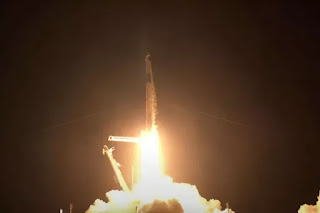 The first all-private space mission has lifted off atop a SpaceX Falcon 9 rocket from Launch Complex 39A at NASA’s Kennedy Space Center in Florida. With a crew of four inside a Dragon Crew capsule, the Inspiration4 mission launched today at 8:03 pm EDT on a three-day flight to raise funds for the St. Jude Children's Research Hospital in Memphis, Tennessee.

Today's launch went off without a major delay under a clear night sky at the start of a five-hour launch window. The first stage of the Falcon 9 shut down at the two-minute-and-37-second mark with the second stage separating and firing three seconds later. As the first stage carried out a re-entry burn for a powered landing on a recovery barge in the Atlantic Ocean, the second stage burned for six minutes and 10 seconds. Then, 12 minutes and nine seconds into the flight, the Dragon capsule Reliance separated from the second stage.

The spacecraft is currently carrying out a series of orbital maneuvers that will bring it to an altitude of 575 km (357 miles). This will be the ninth highest altitude reached by a crewed mission and the highest since the STS-61 Space Shuttle mission in 1993 to service the Hubble Space Telescope. 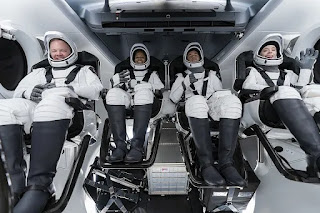 The Inspiration4 crew
SpaceX
Aboard the Reliance are Mission Commander Jared Isaacman, who is the founder and CEO of Shift4 Payments and contractor for Inspiration4. With him are Medical Officer Hayley Arceneaux, a physician assistant at St. Jude Children’s Research Hospital and pediatric cancer survivor; Mission Specialist Chris Sembroski, an Air Force veteran and aerospace data engineer; and Mission Pilot Dr. Sian Proctor, a geoscientist, entrepreneur, and trained pilot. All are making their first spaceflight.

Because the Dragon capsule will not be visiting the International Space Station (ISS), the docking adapter has been replaced with a single-piece glass cupola on the nose that will provide the astronauts with a 360-degree view of space and Earth. This is the largest single-piece window to ever fly in space.

The Inspiration4 mission differs from any previous crewed mission because it is the first conducted entirely as a private venture. Though private citizens have flown into space for decades, this is the first where an all-private crew has flown on a privately built, owned, and operated spacecraft instead of a state-owned craft with government astronauts.

The video below is the live feed of the mission launch.