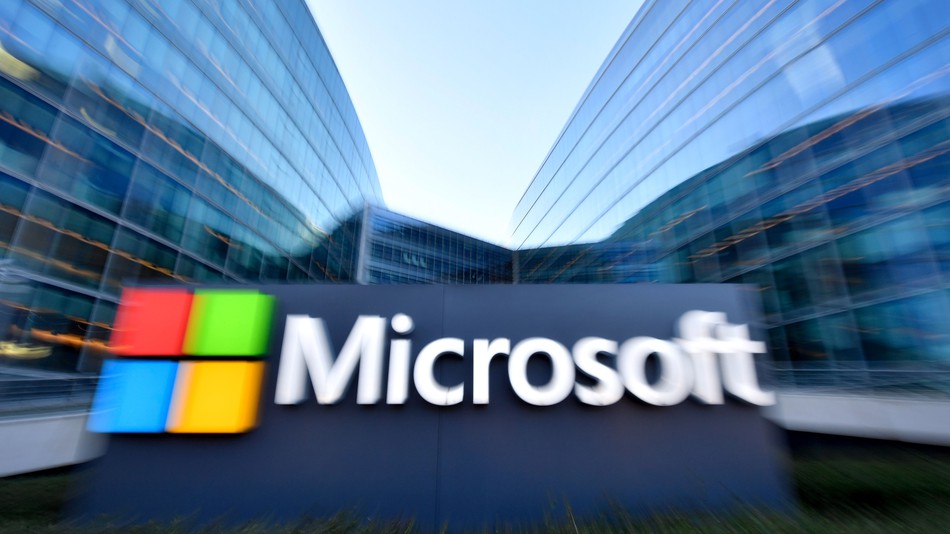 The US software giant passed the mark briefly on Thursday, before its share price fell back.
It makes it one of only three US public firms to have hit the $1tn mark, the others being Apple and Amazon.
Microsoft's stock has climbed by about a third in the past year, helped by the growth of its cloud business.
On Wednesday, the firm said revenue rose 14% to $30.6bn in the fourth quarter, thanks to more cloud growth and an unexpected boost for its software.
Net profit surged 19% to $8.8bn.
It continues the strong performance seen under boss Satya Nadella, who has spent the past five years trying to lessen the firm's reliance on its once-dominant Windows operating system.
Apple and Amazon hit the $1tn mark for the first time last August and September respectively, but both fell back towards the end of the year amid a downturn on global markets.
PetroChina was briefly worth about $1.1tn after floating in Shanghai in 2007, although most of its shares were held by the Chinese government. It is now worth about $200bn.
While the $1tn milestone garners headlines, Microsoft executives have dismissed its importance in the past.
"This is a metric that nobody on the senior leadership team is tracking," Chris Capossela said at an event last year.
"Nobody is sitting around high-fiving when the stock hits some new high."
Microsoft may be best known for its Windows operating system, but it makes more money from its Azure cloud services and Office software package.
While Apple makes more than 50% of its money from the iPhone, and Amazon from its online store, Microsoft's strength has been sticking its fingers in several pies.
In 2018, Windows brought in about 18% of Microsoft's revenue, while Office accounted for 25%.
Its smaller gaming and Xbox division brought in about 9% while its own-brand hardware such as the Surface tablets accounted for about 5%.
The much-ridiculed Bing search engine is also surprisingly profitable: its data powers some of the latest smart speakers including Amazon's Alexa.
Microsoft's involvement in so many growing markets clearly has investors hopeful for its future.