Taliban’s spokesman who was considered ‘ghost like’ reveals he was living right under nose of US, Afghan govt 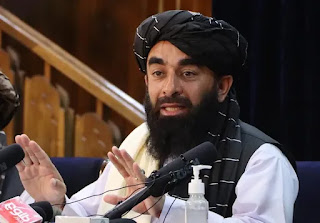 US forces and Afghan government in Kabul while everyone considered him a “ghost-like” figure.

After years of operating in the shadows, heard down the phone lines but never seen, Mr Mujahid stunned many media personalities when they saw him delivering the Islamist group’s first news conference after seizing power from the Afghan government.

The historic press conference was for the first time he had appeared before the media.

“They [US and Afghan National Forces] used to think I did not exist,” said Mr Mujahid told Pakistan’s newspaper the Express Tribune. “I escaped so many times from their raids and attempts to capture me that they seriously considered that ‘Zabihullah’ was a made up figure, not a real man who exists.”

He said he managed to move about in Afghanistan freely despite the massive manhunt by the US forces. He added that the perception that he was a made up figure helped him.

“I lived in Kabul for a long time, right under everyone’s noses. I roamed the width and breadth of the country. I also managed to have first-hand access to the frontline, where the Taliban carried out their actions, and up to date information. It was quite puzzling for our adversaries,” he told the newspaper.

Mr Mujahid claims he continued to live in Afghanistan during two decades of war and the thought of leaving the country never crossed his mind.

He said the US forces would pay locals to obtain information about his whereabouts and even managed to launch raids to find him.

Following his press conference, BBC’s Yalda Hakim said she was shocked to see the face of the man who has managed to remain a mystery for years. She said it’s hard to reconcile how he made “bloodthirsty statements and now he’s suddenly peace loving?”

“Some of these texts were hardcore Islamist texts. Some of those you think: ‘This guy is bloodthirsty for the Americans, he’s bloodthirsty for anyone in the Afghan government.’ Then today he sits there and says there will be no reprisals," Ms Hakim said.

“The photo of Zabihullah Mujahid, the Taliban spokesman, who was more responsive and active than the entire team of Ghani’s spokespeople — for over a decade. I have spoken with him & texted him a lot. But this is the first time I am seeing his face,” another journalist, Sharif Hassan said.

But several speculate if Mujahid was a single person or there were several “Zabihullahs” who took turns. Some said that the Mr Mujahid who was addressing the question looked too young to be the same person he talked to all those years.

"There has been speculation for years that it was a made up name, that there were many "Zabihullahs" who took turns. Now of course we are all accepting this is THE Zabihullah Mujahid. Maybe he isn’t?" Lyse Doucet, the BBC’s chief international correspondent, was quoted as saying by the network.

Talking about his personal life, Mr Zabihullah said to the newspaper that he was born sometime in 1978 in the Gardez district of Paktia province and his armed struggle started against foreign forces when he was 16-years-old.

“In the initial stages, I took part in fighting in various locations of the country. I was also imprisoned for six months in the Mehsud era,” he said

He said Zabihullah is his actual name but Mujahid was given to him by his seniors and grew affectionate of the name.