SpaceX’s Starlink internet service has more than 145,000 users so far 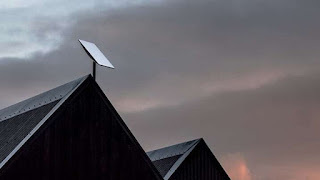 A Starlink user terminal, also known as an antenna or satellite dish, on the roof of a building.(Photo:-SpaceX)

Elon Musk's SpaceX provided an update on its Starlink internet

service on Thursday, as the company launched more satellites into orbit.

SpaceX engineer Jessie Anderson said during a webcast of the company's first launch of the year that Starlink now has more than 145,000 users in 25 countries around the world. It fell from 140,000 users in early November, but represents a slowdown in user growth.

Starlink is the company's plan to build an interconnected Internet network with thousands of satellites - known in the space industry as a constellation.

It is designed to provide high speed Internet access to consumers all over the planet. SpaceX has approximately 1,800 Starlink satellites in orbit.

The increase of 5,000 users in two months represents slower growth. As of November, SpaceX had added about 11,000 users per month since the service began in October 2020.

Late last year, SpaceX noted on its website that the "silicon shortage has delayed production" of Starlink user terminals, “which  impacted our ability to fulfill orders.

SpaceX's valuation has reached over $100 billion, which industry analysts attribute largely to the market potential of its Starlink service.