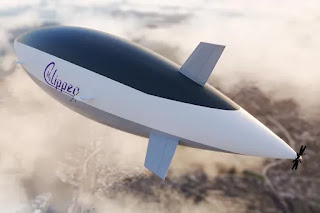 California startup H2 Clipper wants to bring back hydrogen-filled airships, claiming they can unlock completely green intercontinental cargo operations carrying 8-10 times the payload of any cargo plane over 6,000 miles, at a quarter of the price.

Its lift gas would be hydrogen – providing some 8 percent more lift per volume than helium at something around 1/67th the price. Its propulsion would be fully electric, running on liquid hydrogen put through a fuel cell. H2 Clipper says it'd operate efficiently for missions ranging from under 500 miles (804 km) to "well over 6,000 miles (9,656 km)." That would link any two points on the globe with a single fuel top-up. In the current renders, the company shows the top of this huge aircraft covered in photovoltaic cells, which could theoretically enable it to generate its own hydrogen, if it were to carry a water source and an electrolyzer.

With the right provisions put in place, it could take goods right from a factory to a distribution center without needing additional ground transport stages to and from airports, thanks to its vertical takeoff and landing capabilities.

H2 Clipper says the economics will be attractive as well, estimating costs between US$0.177 to $0.247 per ton-mile for distances between 1,000-6000 miles. It says this is a quarter of the price of today's air transport. Certainly, it'll still be more expensive than sending things on a container ship, but it does potentially cut out additional logistics challenges at either end – and the shipping sector's emissions issues could well see it slapped with carbon taxes as the race to zero carbon by 2050 develops globally.

On the surface, it all looks to work pretty neatly. Of course, there's a large elephant in the room here, or at least a huge manatee: hydrogen, along with any other flammable substance, is currently prohibited as a lift gas in the United States and Europe, due to some high-profile dirigible disasters in the early 1900s, burned into the public consciousness by newsreels of the Hindenburg conflagration in 1937 that killed 35 of the 97 people on board.

But it's possible that all is not as it seems in this regard – and indeed there are several groups beginning to call foul on what they see is an unfair perception and legal treatment of hydrogen airships that could be holding back a valuable technology.

The argument is well put in this recent piece by Eli Dourado, Senior Research Fellow at the Center for Growth and Opportunity at Utah State University. We'll bullet-point it here for you:

The full piece makes interesting reading. H2 Clipper, for its part, chips in to point out that extensive testing in the automotive industry has proven that hydrogen tanks can be shot with 50-caliber rifles, and hydrogen escaping into the air can be ignited with naked flames without causing explosions.

"With modern engineering standards," writes Dourado, "there is no doubt that hydrogen could be made a safe lifting gas." But, he points out, the only way to find out for sure would be to develop and certify a next-generation hydrogen airship, and this would require millions in investment, against the possible risk that the program might be shut down by regulations.

It's a tough ask for investors, although a new class of investor might have the stomach to throw down. Green hydrogen projects are taking off at an extraordinary rate as countries and companies alike wrestle with the hurdles and opportunities of decarbonization. The investors behind these have plenty of skin in the game already, and an incentive not just to develop potential markets for their hydrogen, but to rehabilitate its image.

H2 Clipper's hydrogen cargo airships might be just the ticket. They present minimal risk to human life – they'll initially be piloted, but could eventually become completely autonomous. They present a useful middle ground in the transport logistics puzzle – cheaper than planes, faster than ships, virtually unlimited range and excellent operational flexibility. And there's currently no alternative if you want to cover serious distances without creating carbon dioxide emissions.

These airships could be immediately useful to the hydrogen industry, too; H2 Clipper says that if you're looking to export liquid hydrogen internationally, as many countries are hoping to do in bulk, its airships will beat rail, trucks, ships and even pipelines on price over distances greater than 1,000 miles – while delivering the H2 quickly to just about anywhere on Earth.

H2 Clipper Founder and CEO Rinaldo Brutoco presented at the 2nd International Hydrogen in Aviation Conference, held in Glasgow this September, saying that the company would commence drawings for a sub-scale prototype in 2022, hoping to fly it in 2024. Stretch goals include getting a dirigible into operation by 2026, and having 100 of them out there hauling cargo by the early 2030s.

It's a fascinating idea with some obvious hurdles to overcome. We'll be keeping an eye on the company's progress!