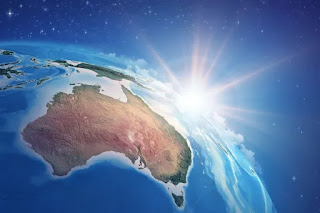 will send Australian sunshine more than 3,100 miles (5,000 km) to Singapore, via high-voltage undersea cables. Opening in 2027, it'll be the largest solar farm and battery storage facility in history.
Australia's Northern Territory has abundant space and sun; Singapore is pressed for space, and looking to transition to renewable power. The two could soon be connected in one of the largest and most ambitious renewable energy projects ever attempted.

The Australia-Asia PowerLink project, led by Australia's Sun Cable, plans to create a mammoth "Powell Creek Solar Precinct" on 12,000 hectares (29650 ac) of arid land about 800 km (500 miles) south of Darwin. The site, chosen because it's one of the most consistently sunny places on Earth, would be home to a mind-boggling 17-20 gigawatts of peak solar power generation and some 36-42 GWh of battery storage.

To give you a sense of scale, that's nearly 10 times the size of the world's current largest solar power installation, the 2.245-GW Bhadia Solar Park in India, and more than 30 times more energy storage than the last "world's biggest battery" project we covered in February. It's a bit big. 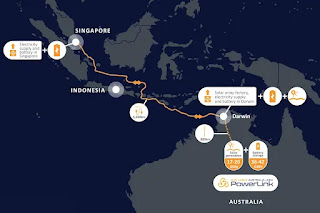 Power will travel north to the coast through overhead cables, and then it'll travel northwest to Singapore via some 4,200 km (2,600 miles) of high-voltage DC submarine cable along the sea floor, making a dog-leg through some of the fiddly islands of Indonesia. It'll supply up to 3.2 GW of dispatchable clean energy, which Sun Cable says will provide up to 15 percent of Singapore's electricity and power up to three million homes.

The environmental benefits will be significant, cutting about 11.5 million tons of CO2 emissions, which the company says is the equivalent of removing 2.5 million cars from the road. 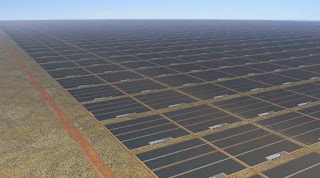 The PowerLink project will roll out an extraordinary 17-20 GW of solar cells over a 12,000 hectare facility in Australia
Sun Cable

The Australia-Asia PowerLink project has been granted Major Project status by the Australian and Northern Territory governments. The company has completed a Series A capital raise to get things going, and has completed the sub-sea survey process in the 750 km (466 miles) of the route that falls in Australian waters. Indonesia is on board, having recommended the cable route and approved a survey permit.

Environmental studies are underway, capital raising is set to close in 2023 and construction is set to begin shortly afterward. The plan is for power to start selling in Darwin by the start of 2026, and for Singapore to come online at the start of 2027.