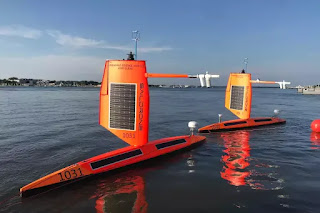 A small fleet of Saildrone Explorers was deployed from Jacksonville a few months ago to monitor the 2021 Atlantic Ocean hurricane season, and one of them has now captured video footage from inside the eye of a Category 4 hurricane
Saildrone
Earlier this year, San Francisco's Saildrone joined forces with the National Oceanic and Atmospheric Administration (NOAA) to launch five sensor-packed unmanned surface vehicles into paths of hurricanes in the Atlantic Ocean to gather data. Now one of those drones has captured footage from inside a Category 4 hurricane.
Like the rest of its siblings in the small fleet of storm chasers, SD 1045 is a Saildrone Explorer model that's equipped with a special hurricane wing to allow it to weather the extreme conditions around and inside the storms of the 2021 Atlantic Ocean hurricane season to collect vital scientific data. 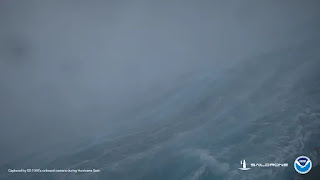 Hurricane Sam is currently raging in the region, recently becoming a category 4 on the Saffir–Simpson scale, and the unmanned drone was directed into the eye of the storm on September 30 where it reportedly faced 50-foot (15-m) waves and winds in excess of 120 mph (190+ km/h) to collect real-time data that will inform future numerical prediction models.

"Using data collected by saildrones, we expect to improve forecast models that predict rapid intensification of hurricanes," said NOAA scientist, Greg Foltz. "Rapid intensification, when hurricane winds strengthen in a matter of hours, is a serious threat to coastal communities. New data from saildrones and other uncrewed systems that NOAA is using will help us better predict the forces that drive hurricanes and be able to warn communities earlier." 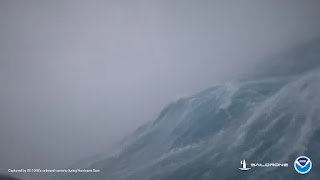 The real-time data from within the Category 4 hurricane captured on video by Saildrone Explorer SD 1045 will inform hurricane prediction models
Saildrone
As well as gathering data on air temperature, relative humidity, biometric pressure, wind speed and direction, water temperature and salinity, sea surface temperature, and wave height and period for onward transmission to NOAA scientists, the intrepid Saildrone Explorer SD 1045 also has an onboard camera – and the first footage from inside a major hurricane has now been released, which you can see in the videos below.
Source: Saildrone