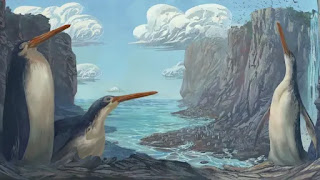 What's black and white and the size of a 10-year-old child?

A giant, extinct penguin that lived between 27 million and 35 million years ago in what is now New Zealand.

The enormous diving bird stood about 4.5 feet (1.4 meters) tall and had unusually long legs and beak for a penguin, according to scientists who recently described it as a newfound species. It was discovered in 2006 by fossil-hunting students with the Hamilton Junior Naturalist Club (JUNATS), a natural history club in Hamilton, New Zealand, for children ages 10 to 18.

A group of club members, led by JUNATS fossil expert Chris Templer, found the extinct giant's bones on a small peninsula in Kawhia Harbor during a field trip. The fossil is the most complete giant penguin skeleton ever discovered, and the length of its hind limbs inspired researchers to name it Kairuku waewaeroa: "waewae" means "legs" and "roa" means "long" in the Māori language, scientists wrote in a new study about the giant bird.

Today, the largest living penguin species is the emperor penguin (Aptenodytes forsteri), which can measure up to 4 feet (1.2 m) tall and weigh up to 99 lbs. (45 kilograms). However, giant penguins that were even bigger were more common during the Paleogene period (about 66 million to 23 million years ago) across Zealandia — a landmass that includes New Zealand, and which is now mostly underwater. Giant penguins that lived millions of years ago were also thinner than portly emperor penguins, the researchers reported.

When the JUNATS young naturalists spied the fossil, it was sticking out of a block of sandstone that had been uncovered by the tide, and they initially mistook it for a rusty propeller. But Templer and another group leader, Tony Lorimer, quickly realized that they had found something exceptional, according to Hamilton's Waikato Museum.

"I went 'Oh my God' and just about keeled over on the reef," Templer told Agence France Presse in 2006. At the time, he also told the Waikato Museum, "We were looking for fossil sea urchins and what we found was a penguin — what a bonus!"

But the fossil was in danger of being damaged by ocean erosion. Its location "was just on the perimeter of a scenic reserve," but it was also in a spot that was only accessible between high and low tides, so officials allowed the club to excavate the fossil, Templer told Stuff, a New Zealand news website, in 2018. He prepared the find at his home, and it remained at JUNATS' Te Kauri Lodge Museum until 2017, when the club donated the skeleton to the Waikato Museum, according to a statement. 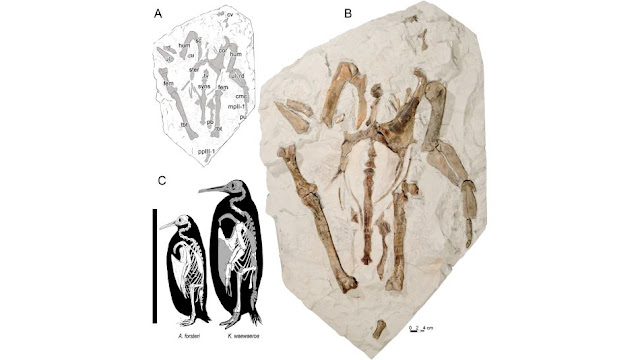