Track-inspection drone rides the rails, and flies away from trains 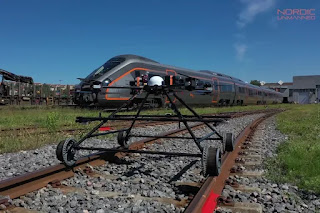 Along with recording railway data, the Staaker BG-300 can also transmit it live to administrators
Nordic Unmanned
Although the inspection of railway tracks is a very important task, such inspections typically have to be performed when no trains are anywhere nearby. The new rail-riding Staaker BG-300 Railway Drone offers an alternative, as it just flies off the tracks when trains approach.
Manufactured by Norwegian company Nordic Unmanned, the BG-300 is a fuel-cell-powered multicopter drone that also packs a set of four motorized rail wheels. Utilizing those, it can cruise along a rail line at an average speed of 20 km/h (12 mph), reportedly travelling up to 200 km (124 miles) at a time.

As it does so, it inspects the tracks utilizing cameras and "other sensors," plus it can lubricate rail switches if required. Importantly, though, if it encounters any other rail traffic, it will autonomously fly up off the tracks in order to get out of the way until that traffic passes. It can also use this functionality to move from one track to another.

As a result, stretches of rail lines do not have to be closed to trains while inspections are being performed. Such is not the case with traditionally used inspection vehicles, such as trolleys or rail-wheel-equipped trucks.

According to Nordic Unmanned, the BG-300 was developed in partnership with "a large European national railway infrastructure owner." The drone should begin commercial service in Europe as of the first half of next year.

You can see it in action, in the video below.