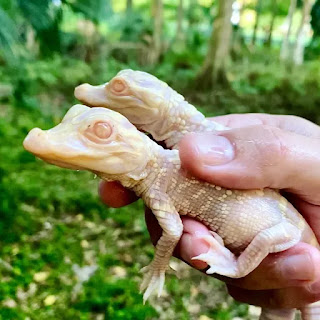 The rare reptiles hatched this summer at Wild Florida in Kenansville, Florida. They're the babies of 27-year-old Snowflake and 16-year-old Blizzard, a pair of albino alligators the zoo and safari park purchased in 2017. This is the second set of hatchlings born to Snowflake and Blizzard, who also had a pair of babies last year according to Wild Florida.

Albinism is a condition marked by a lack of pigmentation in the skin, eyes, claws and (in mammals, at least) hair. There are probably only about 200 albino alligators in the world, according to the South Florida Sun-Sentinel. Not only does their pink-white skin predispose them to dangerous sunburns, but their lack of camouflage is a real disadvantage.

"They're like candy canes," said Joe Wasilewski, a wildlife biologist and member of the International Union for Conservation of Nature (IUCN) crocodilian specialist group. In other words, they're highly visible and tasty to predators ranging from birds to adult alligators.

The hatchlings' eggs were two of 18 collected from their mother Snowflake on April 30, 2021. The eggs were put in an incubator for about 60 days to keep them at a stable temperature and increase the chances of survival. The genetic mutations that cause albinism tend to make animals less hardy in general, Wasilewski told LIve Science.

The new babies are part of a decades-long history of albino alligators at attractions in Florida, Louisiana and other gator farms. Alligators were once endangered, Waskilewski said, but conservation and management has grown their numbers to high levels — 1.2 million in Florida alone. For that reason, many states now issue permits for alligator hunting and egg collection from the wild. This keeps alligator population numbers sustainable in the amount of habitat available to them, Wasilewski said. As part of this program, some licensed facilities and individuals are allowed to harvest, purchase and breed alligators. 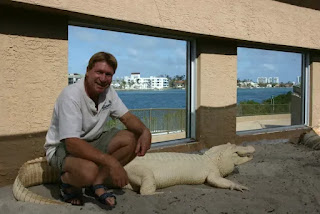 The family line of the new babies hails from Louisiana, where a permitted egg collector found a nest with several albino babies in the 1990s. The Saint Augustine Alligator Farm Zoological Park in Florida bought the rights to harvest the nest in subsequent years (gators nest in the same area year after year). Wild Florida purchased Snowflake and Blizzard from the Saint Augustine Alligator Farm.

There's no real conservation advantage to owning or breeding albinos or other alligators with unusual coloration, Wasilewski said, but they're a tourist draw.

The new babies are small enough to be picked up in one hand, with red eyes and barely visible yellow and pinkish stripes along their white backs. They're not on public display yet, but they will soon be moved to an aquarium in the gift shop, according to the Sun-Sentinel. The babies can't be kept with their parents, zoo co-owner Sam Haught told the newspaper, lest the mother decide to snack on them.

"Because of their albino skin, they get sunburned really easily. And they don’t know they’re albino," Haught told the Sun-Sentinel. "So, they’ll sit out in the sun all day and get sunburned and kill themselves, basically."

Zoos like Wildlife Florida have to abide by regulations such as caging requirements, according to the state Fish and Wildlife Conservation Commision. Because of their decreased hardiness, it's hard to breed albino alligators, Wasilewski said. The fact that Snowflake and Blizzard have produced viable eggs suggests they're healthy and being treated well, he said. Similar wildlife attractions in Florida also have odd-colored alligators, Wasilewski said. Gatorland in Orlando, for example, is home to several albino alligators as well as a pair of leucistic alligators, which have a partial loss of pigmentation. Albino alligators have a total loss of pigmentation, causing their eyes to turn pink, while leucistic alligators have white bodies and blue or black eyes. In captivity, these unusual alligators can live for decades.

The zoo posted a video of the brand-new babies on Facebook on Aug. 10.