Say hi to Hycean worlds, a new class of exoplanet that could host life 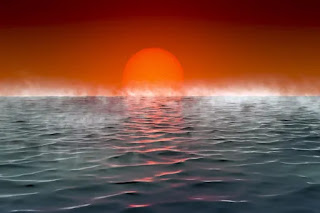 An artist's impression of a Hycean world, a new class of exoplanet that's kind of like a water-logged mini-Neptune
Amanda Smith, University of Cambridge
More than 4,400 exoplanets have been discovered to date, and in the hunt for whether there may be life out there most of our attention has been focused on Earth-like worlds. But now, astronomers have defined a new class of exoplanet called “Hycean” worlds that could be a promising place to find signs of life.
Since Earth is the only place we know for sure has life, it makes sense to start the search for extraterrestrial life on Earth-like worlds. But even here on our home planet, life constantly surprises us by turning up in environments we assumed were too harsh, like extremely dry deserts or in the freezing darkness beneath polar ice. Elsewhere in our solar system, some of the most promising places to find aliens don’t seem very hospitable to us either, like the icy oceans of Europa or the liquid-methane floodplains of Titan.

With that in mind, astronomers at Cambridge have highlighted a type of exoplanet that might have been overlooked in the search for life – the mini-Neptune. As the name suggests, these are smaller versions of our own Neptune, with thick atmospheres, rocky or icy layers and in some cases, water oceans. They’re usually between 1.6 times and 3.9 times wider than Earth.

And now the team has defined a sub-class of these mini-Neptunes. So-called Hycean worlds are hot mini-Neptunes with hydrogen-rich atmospheres and vast oceans on their surfaces. The heat and the pressure wouldn’t be very inviting to us humans, but it’s possible that some forms of life might find it idyllic.

The holotype Hycean planet is K2-18b, which is located about 124 light years away, measures 2.6 times wider and 8.6 times more massive than Earth, and orbits its host star within the habitable zone. The Cambridge astronomers have been studying it for a few years now – in 2019 they reported the detection of water vapor in its atmosphere, and last year ran models of its composition. Some scenarios painted it as potentially habitable for certain forms of life.

From there, the astronomers expanded the search to more broadly define Hycean exoplanets. They say that these worlds can be up to 2.6 times the width of Earth, up to 10 Earth masses, and temperatures in their atmospheres could reach a sweltering 200 °C (392 °F). However, conditions in their oceans might be more comfortable. They’re likely to be common too, nestled in between the smaller, rockier Super-Earths and the gaseous, larger mini-Neptunes.

There could be other variations on the class too. “Dark Hycean” worlds are those that are tidally locked to their star, meaning one side is always baking in starlight and the other bathed in eternal night – the latter of which could support life. “Cold Hycean” worlds meanwhile are those that don’t receive much radiation from their host star.

The team says that Hycean planets could be one of the most promising places to look for signs of life. Not only because they’re common, but biomarkers of life, such as methyl chloride and dimethyl sulphide, could be readily spotted in their atmospheres with telescopes such as the upcoming James Webb.

“Essentially, when we’ve been looking for these various molecular signatures, we have been focusing on planets similar to Earth, which is a reasonable place to start,” says Dr. Nikku Madhusudhan, lead author of the study. “But we think Hycean planets offer a better chance of finding several trace biosignatures.”

In preparation, the team has already identified a list of Hycean candidate planets that could be investigated by James Webb and other telescopes. They all orbit red dwarf stars no more than 150 light years away.

“A biosignature detection would transform our understanding of life in the universe,” says Madhusudhan. “We need to be open about where we expect to find life and what form that life could take, as nature continues to surprise us in often unimaginable ways.”

The research was published in the Astrophysical Journal.