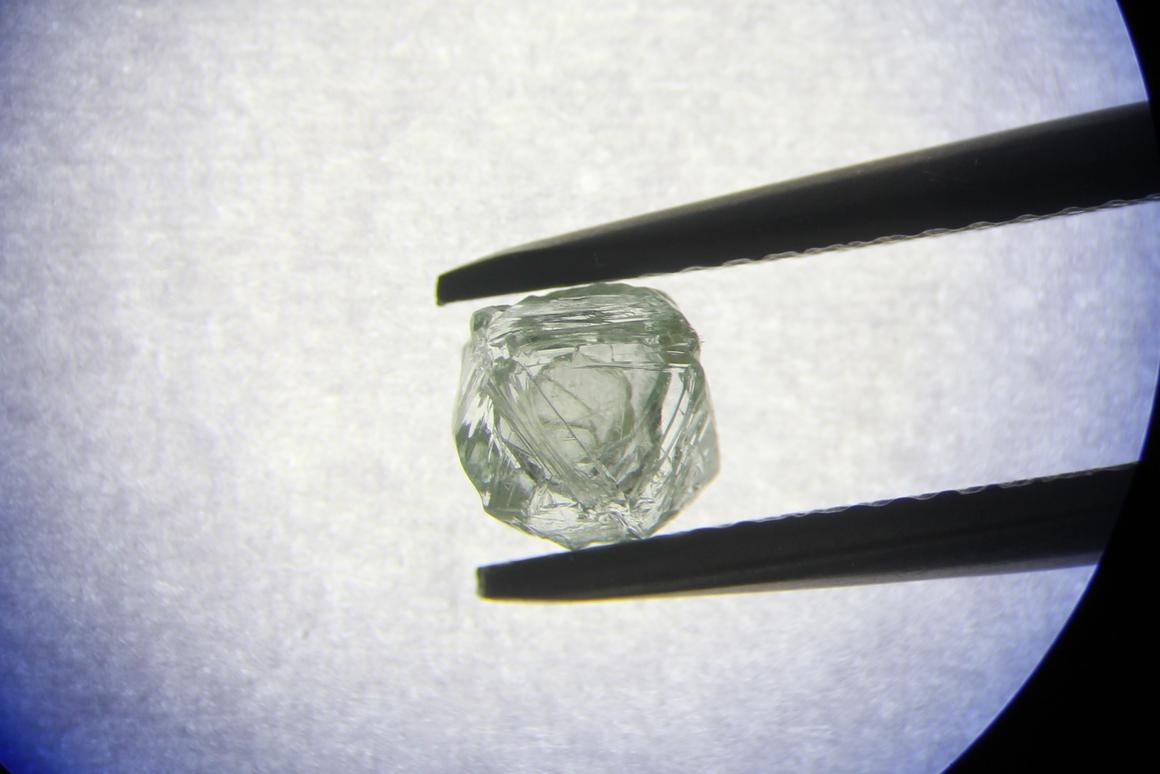 The Matryoshka diamond, with its free-moving diamond within a diamond, is thought to be one of a kind

Thanks largely to De Beers, which was created in the late 19th century to control the diamond trade, most people think diamonds are a lot scarcer than they actually are. But an extraordinary diamond unearthed in Russia definitely lives up to the ultra-rare tag, being the only such example ever discovered. It is a diamond with another diamond that moves freely inside it, earning it the name the Matryoshka diamond for its resemblance to traditional Russian nesting dolls.
The unusual diamond was discovered during a sorting process in Nyurba, a mining town in eastern Russia. The outer diamond measures just 4.8 x 4.9 x 2.8 mm, and its internal cavity is 6 cubic mm. The tabular-shaped internal diamond bouncing around in this cavity measures 1.9 x 2.1 x 0.6 mm, and has a volume of 1.6 cubic mm. The diamond weighs a total of 0.62 carats (0.124 g), with the internal diamond estimated to account for 0.02 carats (0.004 g) of this.
Scientists working in the Research and Development Geological Enterprise of Alrosa, the partially state-owned diamond company that runs the Nyurba diamond mine, have subjected the Matryoshka diamond to various analyses, such as infrared and Raman spectroscopies, and X-ray microtomography, and estimate it may be over 800 million years old. As for how it formed, they have a couple of ideas to explain how the internal diamond came first and was subsequently encased in the external one.


"We have two main hypotheses," says Alrosa's Oleg Kovalchuk. "According to the first version, a mantle mineral captured a diamond during its growth, and later it was dissolved in the Earth's surface. According to the second version, a layer of porous polycrystalline diamond substance was formed inside the diamond because of ultra-fast growth, and more aggressive mantle processes subsequently dissolved it. Due to the presence of the dissolved zone, one diamond began to move freely inside another on the principle of matryoshka nesting doll."
Neither cavities or inclusions, which is the name given to internal defects, such as structural imperfections, foreign material or another diamond crystal, are uncommon in diamonds. But while they usually lower the value of a diamond, the diamond inclusion able to move freely around the cavity inside the Matryoshka diamond is likely to have the opposite effect due to its apparent uniqueness.
"As far as we know, there were no such diamonds in the history of global diamond mining yet," says Kovalchuk. "This is really a unique creation of nature, especially since nature does not like emptiness. Usually, some minerals are replaced by others without cavity formation."


The diamond in a diamond can be seen in the video below.