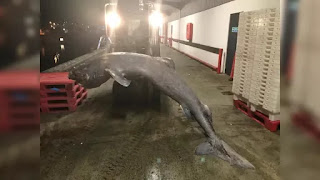 A rare Greenland shark that washed up on a U.K. beach could be at least 100 years old, but experts aren't sure why it became stranded.

The dead shark was first spotted on the sand in Newlyn Harbour, Cornwall, on the southwest coast of England, on March 13. But before experts could examine it, the tide came in and took the carcass back out to sea, according to Cornwall Wildlife Trust Twitter posts.

The shark was then rediscovered floating off the coast of Cornwall on March 15 by a recreational boating company called Mermaid Pleasure Trips and was brought back to shore. Greenland sharks are rarely sighted in the U.K., and this is the country's second recorded Greenland shark stranding.

"Even though it's a sad event when these beautiful, spectacular animals do strand on our beaches, it's such a valuable opportunity for us to study them," Abby Crosby, a marine conservation officer who manages the marine strandings network at the Cornwall Wildlife Trust, told Live Science.

Greenland sharks (Somniosus microcephalus) live in the Arctic and North Atlantic oceans up to 8,684 feet (2,647 meters) below the surface, according to the International Union for Conservation of Nature (IUCN). A 2016 study published in the journal Science estimated that these sharks could live at least 272 years, but scientists still have much to learn about the elusive species.

The shark that washed up in Cornwall was a juvenile female that measured 13 feet (4 m) long and weighed 628 pounds (285 kilograms). Although researchers have yet to determine the shark's age, Greenland sharks typically become sexually mature when they're around 150 years old, according to the 2016 study. The animals continue to grow as they age, and adults can be up to 24 feet (7.3 m) long, according to the St. Lawrence Shark Observatory (ORS).

James Barnett, a veterinary pathologist from the Cornwall Marine Pathology Team, carried out a postmortem of the shark on March 16 for the Cetacean Strandings Investigation Programme (CSIP), a national program that partners with Cornwall Wildlife Trust's Marine Strandings Network. 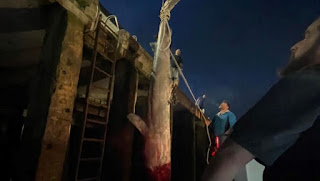