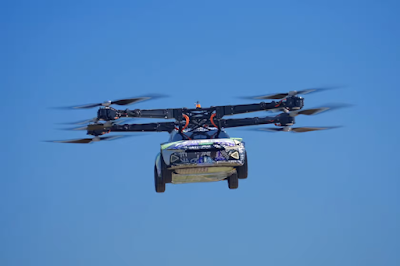 Chinese automaker XPeng has updated the design of its AeroHT flying car – a luxury electric sportster with a fold-out vertical-lift octacopter system on the roof. It looks absolutely nutty, but a two-ton flying prototype indicates this is no joke.

When we first ran across this machine about 12 months ago, it looked a lot cooler and was also a ton more dangerous. The original HT Aero flying supercar design used a much more compact VTOL system featuring just two electric rotors with large-diameter blades. These were mounted on articulating arms designed to fold away under the car's rear bodywork, making for an exceptionally pretty and sci-fi looking design, albeit at the expense of safety and complexity.

It makes sense that the company has switched things up to an eight-prop system for the latest design – this adds a bunch of redundancy in case something fails. It's much bulkier, though, and as a result the new design looks less like a Minority Report hypercar and more like a luxury electric rally-raider with a massive box on top, as you can see in the render video below.

The dream is the same, though: Xpeng wants to offer a true flying car you can drive around on the highway and then lift off vertically to cruise over traffic jams. Kicked off with a massive half-billion-dollar bank account last year, AeroHT is also working on an eVTOL air taxi design, which has just been flown for the public in Dubai. But that thing is a simple manned multicopter, the likes of which we've seen plenty of times before.

The eVTOL flying car, on the other hand, is the kind of bonkers idea that very few other companies are even experimenting with – certainly nobody with this kind of money behind them.

Why not? Well, if weight is the enemy of flight, it's the mortal nemesis of electric VTOL flight – particularly for straight-up wingless multicopter designs like this, which need to burn energy constantly to stay airborne. Lithium batteries are heavy enough that even single-purpose manned multicopter air taxis all suffer from heavily restricted endurance and range figures. 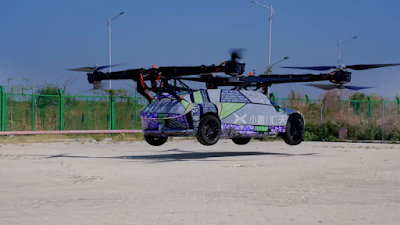 Street-legal electric cars are typically very heavy in and of themselves; they need to pass crash tests. They need separate road-going powertrains, suspension, brakes, big wheels, windscreen wipers and cup holders, along with great big heavy battery packs. AeroHT's practical little air taxi weighs around 560 kg (1,235 lb) with nobody sitting in it, and still only gets around 35 minutes out of a battery. The flying car's weight could end up being more than four times higher, and it still only flies two people.

And yet here we are looking at a full-size prototype of the X3 flying car prototype in the air. Weighing in at an eye-watering 1,936 kg (4,268 lb), it follows roughly the body shape of the renders, and looks pretty cool from the front. It looks a lot less cool from the sides and back, but bodywork is just bodywork.

The enormous eight-rotor coaxial vertical lift system is mounted on top, in what seems to be a fully fixed configuration with no ability to fold away as yet. With such a mass to lift, the VTOL frame itself is super chunky, and the propulsion units are mounted to what look like steel girders.

In the fight demo video above, the team successfully drives the thing out of a garage under its own power. It then lifts off, hovers, flies gingerly about a bit and comes back in for a nice gentle-looking landing. AeroHT says it's also performed multiple single-rotor failure tests.

No information is given about range or endurance, and indeed given the sheer bulk of this odd machine, we'd be surprised if it can currently stay airborne long enough to listen to a whole song on the radio – and that's presumably without the auto-folding arms and much of the road gear. The company says it's "comparable with any conventional cars in terms of functionality and measurement," in lieu of any power or speed figures, and says that in flight mode, the driver/pilot will control the aircraft using the steering wheel and a right-hand gear lever.

It's not surprising that the X3 flies – it's an aviation truism that with enough thrust, you can make a brick fly. The amazing thing about the X3 is that it exists – it's not a render, there's a team, and a prototype, and a pretty healthy budget, and a plan to make it a product. AeroHT appears to be serious. We'll be flabbergasted all over again if this machine indeed hits the market in 2024 as a street-legal flying car, but then AeroHT has half a billion dollars to play with, plus friendly Chinese auto and aviation authorities to work with, who have already demonstrated that they're willing to grant some impressive leeway to companies that are moving to push tech forward.

Since this appears to be designed as a personal-use aircraft rather than as a commercial air taxi, it'll probably only go through a tiny fraction of the red tape that other eVTOL companies are staring down in their quest to get type certified. And we wonder what kind of tricks XPeng might have up its sleeve in terms of getting this thing homologated for street use – the parent company is scaling up its EV production capabilities at a rapid pace.

So while it does seem incredibly ambitious and probably impractical, this odd duck might have a better chance than most. An intriguing project and one to watch.