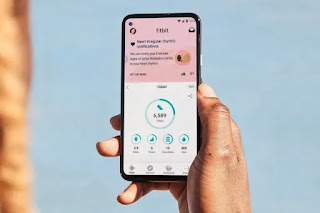 The U.S. Food and Drug Administration (FDA) has authorized a new Fitbit feature designed to continuously monitor a wearer’s heart rhythms for signs of arterial fibrillation. The roll-out is based on a massive study that last year reported the Fitbit algorithm accurately detects 98 percent of irregular heart rhythms.

The new feature uses Fitbit’s photoplethysmography (PPG) sensor to monitor a wearer’s heart beat while a novel algorithm continuously tracks the data for signs of arterial fibrillation. Once the system detects an issue it will send an Irregular Heart Rhythm Notification recommending the wearer seek further medical advice.

“When your heart beats, tiny blood vessels throughout your body expand and contract based on changes in blood volume,” Google explained in a blog post announcing the new feature. “Fitbit’s PPG optical heart-rate sensor can detect these volume changes right from your wrist. These measurements determine your heart rhythm, which the detection algorithm then analyzes for irregularities and potential signs of atrial fibrillation.”

The FDA’s authorization of the new feature is based on the results of a large clinical trial conducted by researchers from Massachusetts General Hospital. More than 450,000 Fitbit users were recruited for the trial, which followed up PPG detection of arterial fibrillation with electrocardiogram (ECG) patch monitoring to validate the findings. That study found 98 percent of arterial fibrillation cases detected by the Fitbit algorithm could be effectively verified with ECG monitoring in the week that followed.

Fitbit’s study followed research from Apple testing a similar feature on its Apple Watch. The Fitbit results were marginally more accurate than what was reported by Apple in 2019.

The authorization for Fitbit to roll this new feature out brings its device in line with the Apple Watch, which has received FDA approval for a similar passive arterial fibrillation monitoring feature. While both devices have already incorporated ECG features that can conduct arterial fibrillation tests on demand, these recent authorizations are the first to allow passive continuous heart monitoring on the wearables.

Google said the new Fitbit feature will be rolled out to all devices in the United States “soon”. The feature is not recommended to be used by those aged under 22 years.