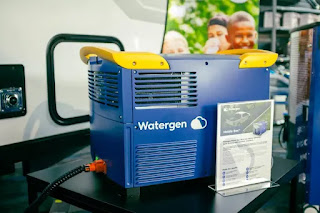 At roughly 33 lb, the Mobile Box is made to be easily carried and transported, unlike previous Watergen designs that were either fixed in place or required trailers or dedicated vehicles to transport
Watergen
For over a decade, Israeli atmospheric water generator (AWG) company Watergen has been one of the players working to refine and grow air-to-water technology that can efficiently pull water vapor out of the air and collect it as fresh, filtered drinking water. Its previous work has focused heavily on large installations to supply communities, businesses and households, and its latest innovations shrink the water-harvesting tech into a form portable enough for overlanders, RVers, tiny home dwellers and other off-grid explorers.
The last time we ran into Watergen's work was at CES 2019, where it showed the Automotive AWG system. The center-console-integrated system was one of the wondrous highlights of the show, but it seemed an odd, limited use for a technology with such potential, a strange detour on a larger journey. Does the average passenger car driver really need a water tap over the cupholders?
If a mobile air-to-water generator is to find a following amongst drivers, it would be a far better fit for vehicles that spend long hours traveling through places without much access to water – motorhomes and camping trailers, specialized remote-work trucks and vans, and perhaps long-haul tractor-trailers, to name a few examples. 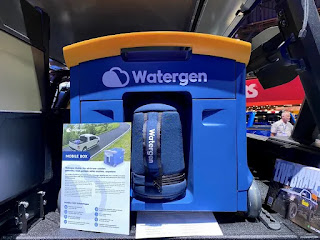 Watergen has made a clear move in that direction with the new mobility lineup it showcased earlier this week at Israel's Smart Mobility Initiative. The most versatile member of the Watergen mobility family is the simply named Mobile Box. It looks something like a traditional portable generator, only instead of burning fuel to create electricity, it uses electricity to pull water from the air around it.

Plug the Mobile Box into a 12- or 220-V vehicle outlet, and the unit sucks in air through a fan, runs it through a filtration system on the way to the patented heat exchanger that extracts water out through condensation, processes it through a multi-level filtration system that includes UV light, and stores it in a reservoir. Users can pour the water through the tap or remove the entire reservoir. Watergen lists average power consumption at 350 watts, peak consumption at 480 watts, and noise level at less than or equal to 52 dBA.

Watergen says that the Mobile Box can produce up to 20 liters of water per day, an amount that matches perfectly with many 20-L (5-gal) jerry cans that car campers use to transport water. The removable internal water tank should presumably be easy enough to dump into a separate storage container to free up for more fresh water production.

While compact for an AWG, the 33-lb (15-kg) empty Mobile Box is still quite large when compared to the many water filter and purifier solutions on the market, some of which can be carried in a pocket. It does, however, provide a viable option for areas where finding water to purify might prove a problem. Assuming it works reliably, it could cut the amount of water with which campers set out, thereby offsetting its own weight and volume in saved water canister volume and stored water weight.

RVers looking for a more streamlined design will find it in Watergen's "On Board" system, which puts the main heat exchanger unit on the roof of the vehicle, where it sits much like an air conditioner. It then cycles the water through the RV plumbing to the faucet(s). That version makes up to 50 liters (13 gal) of drinking water per day.

Watergen is far from the only entity working this particular corner of the market. From nano to macro; from contests, to university research, to world records; from dense desert fog to sunny seawater; and from trailerable portables to full-blown buildings, we've seen the theme of atmospheric water generation pop up again and again ever since we began covering tech nearly two decades ago.

Watergen's Mobile Box is a smaller, more portable design than other products we've seen, but it's not the only model in that category, either. Earlier this year, Oklahoma-based Exaersis Water Innovations presented its own portable AWG for campers and off-grid travelers at virtual CES and again at Outdoor Retailer Summer Market. Its AquaTap has a slightly more digital, high-tech look to it and promises the same rate of 20 liters per day.

It looks as though Exaersis and Watergen might be competing to get their mobile systems to market, as neither is available for purchase yet. Exaersis said in a July announcement that it plans to have the AquaTap available for retail purchase in early 2022. Watergen also plans to bring its first mobile products to market in 2022.

Prior to being on show at the Smart Mobility Initiative this week, the Mobile Box made a debut in the bed of a Ford Ranger Tremor overland show truck at last week's SEMA show. Developed by Ford and Outside magazine, the concept demonstrates how Watergen's 21.7 x 15.8 x 15.8-in (55 x 40 x 40-cm) water maker box could easily integrate into a camper truck. In the concept, it fits neatly next to a slide-out ARB fridge/freezer and in front of a BioLite FirePit.

It might have a more difficult time squeezing into a space-challenged camper, but the Mobile Box appears to work quite well within the framework of an open pickup bed below a lifted rooftop tent. Campers would certainly want to carry a primary water tank or canister(s), but the Mobile Box would make a nice backup, taking the place of the onboard water collecting/filtration systems that are sometimes built into expedition trucks and trailers, whether for emergency use or just adding supplies for a longer trip.

The video below takes a closer look at how the On Board system integrates into a camper van.