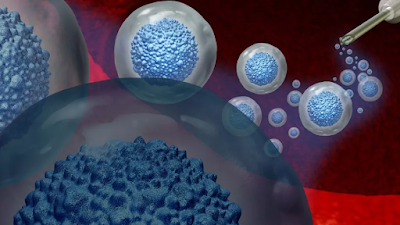 After receiving a stem cell transplant, a 66-year-old man may be the fifth person

to be cured of HIV, the virus that causes AIDS, researchers reported Wednesday (July 27). The patient, who wishes to remain anonymous, is the oldest person yet to undergo the procedure and enter long-term remission from the disease.

The man — known as the "City of Hope patient" in reference to the medical center in Los Angeles where he was treated — was first diagnosed with HIV, the human immunodeficiency virus, in 1988, according to a statement(opens in new tab) shared by City of Hope. "When I was diagnosed with HIV in 1988, like many others, I thought it was a death sentence," the patient said.

Just the year before, in March 1987, the U.S. Food and Drug Administration approved the first antiretroviral therapy, or medication for HIV, called azidothymidine (AZT), according to the National Institute of Allergy and Infectious Diseases(opens in new tab). It wasn't until the mid-1990s that combination therapies for HIV would come into use; these therapies combined two to three HIV drugs to boost the efficacy of the treatment and help prevent patients from developing resistance to the drugs. Such combination therapies are now the standard of care for the treatment of HIV.

The City of Hope patient took antiretroviral drugs for more than 31 years to control his HIV. At one point, the man's condition had progressed to AIDS (acquired immunodeficiency syndrome), meaning his white blood cell count had fallen to critically low levels, NBC News reported(opens in new tab). He took AZT and some of the other early HIV medications, which were prescribed individually, before switching to a highly effective combination antiretroviral treatment in the 1990s.

Several decades later, in 2018, the patient developed acute myelogenous leukemia (also called acute myeloid leukemia, or AML), a cancer of the blood and bone marrow. As a treatment for both the cancer and HIV, doctors performed a blood stem cell transplant with cells from a donor who carried a rare genetic mutation. This mutation, called homozygous CCR5 delta 32, renders its carrier resistant to HIV by altering the entryway that the virus usually exploits to invade the body's white blood cells.

Following the man's transplant, these mutant, HIV-resistant cells steadily took over his immune system. In March 2021, under the careful supervision of his medical team, the patient stopped taking antiretroviral medications, and to date, there have been no signs of HIV replication in his body.

The team describe the patient as being in long-term remission, as there's been no trace of viable virus in his system for 17 months; they will continue to monitor his condition and may declare him officially "cured" at a later date, if his status remains unchanged, NBC News reported.

The City of Hope patient's case is very similar to that of the so-called Berlin patient, the first person cured of HIV.

The Berlin patient, who later revealed his name to be Timothy Ray Brown, also developed AML and received a bone marrow transplant from a donor with an HIV-resistant genetic mutation. (Bone marrow contains blood stem cells.) Two others — the Düsseldorf and London patients — were cured using the same procedure, according to NBC News, and recently, one woman was cured after receiving a stem cell transplant that used cells from umbilical cord blood, Live Science previously reported.

"[The City of Hope patient's case] is yet another case that resembles Timothy Brown from years ago," David D. Ho, one of the world's leading AIDS researchers and director of the Aaron Diamond AIDS Research Center at Columbia University, told The Washington Post(opens in new tab). However, given the risks of the transplant procedure and the rarity of the HIV-resistant mutation, such treatments aren't accessible to the majority of HIV patients, Ho said.

"While a transplant is not an option for most people with HIV, these cases are still interesting, still inspiring and illuminate the search for a cure," Dr. Sharon Lewin, an infectious-disease specialist at the Peter Doherty Institute for Infection and Immunity at the University of Melbourne in Australia, said at a news conference, according to NBC News. Some research groups are working to develop gene editing techniques that could introduce the HIV-resistant mutation into patients, The Washington Post reported.

Dr. Jana K. Dickter, a City of Hope associate clinical professor in the Division of Infectious Diseases, spoke about the City of Hope patient's case Wednesday at the 2022 International AIDS Conference in Montreal.