Walking an Extra 4,500 Steps Per Day Could Help You Live Longer 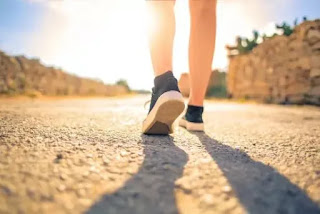 A recent study from Health Survey examined data from over 50,000 people over the

age of 30 in the United Kingdom and found an interesting factor. All participants who had reported that they walk for anywhere between 10-30 minutes every day for the last month and no history of diagnosis’s that included heart disease, angina, stroke, or cancer.

When researchers at the University of Sydney examined the follow-up reports from participants, they found that people who reported walking at a fast pace were less likely to die of any natural cause than those who walked slower by 24 percent. When comparing average speed walkers to slow walkers the researchers also found that the average speed walkers were at a 20 percent risk of death. Speed walking has shown to also possibly reduce heart disease as the study found that average walkers were 24 percent less likely to die from heart disease while the fast-paced walkers had a 21 percent reduction.

The lead author Emannuel Stamatakis, a professor with the university’s school of public health, stated:

“Walking pace is associated with all-cause mortality risk, but its specific role – independent from the total physical activity a person undertakes – has received little attention until now”

Emmanuel also noted that the study did not show any links between speed walking and death from cancer.

How do you know if you’re a speed walker or an average walker? The study considered those who typically walk between 3.1 to 3.7 miles per hour were fast-paced but can also depend on their physique and fitness level. If you’re unable to test the speed at which you walk Stamatakis recommended “an alternative indicator is to walk at a pace that makes you slightly out of breath or sweaty when sustained.’

Overall researchers said as long as you were taking at least 4,500 steps per day that were enough to help extend your lifespan. Even just taking an extra 1,000 steps per day was shown to help reduce the risk of death by 28 percent.

Celebrate more birthdays later in life by breaking out your walking shoes now.

So how were participants monitored? The researchers asked participants to wear a step-counting device for a period of four to seven days to measure their activity. Everything from stair-climbing to short and long walks was measured. Out of the 16,000 women included in the study, the women who had taken over 2,000 uninterrupted steps had a 32 percent reduced risk of death. When researchers analyzed the data of the women that had taken 4,500 steps per day, they found those women had a significantly reduced risk of death when compared to the least active women.

Christopher Moore, the study lead author who has a Ph.D. in epidemiology said “Technological advances made in recent decades have allowed researchers to measure short spurts of activity. Whereas, in the past, we were limited to only measuring activities people could recall on a questionnaire. With the help of wearable devices, more research is indicating that any type of movement is better than remaining sedentary.”

Moore added that “older adults face many barriers to participating in structured exercise programs, so many may find it more convenient and enjoyable to increase everyday walking behaviors, like parking slightly further from their destination or doing some extra housework or yardwork.”

The clinic that conducted the study stated that the average American walks about 3,000-4,000 steps every day which translates to two miles of walking. While some people may think that is a lot the actual recommended amount of steps to take daily is 10,000. The findings were presented at the Epidemiology, Prevention, Lifestyle & Cardiometabolic Health Conference 2021.

So next time you find yourself with Cirque Du sore legs just remember, you are prolonging your life.

Briana Brockbank lives in Richmond, Virginia with her wonderful children and partner. She is a skeeball and coffee enthusiast and loves to unwind with a good book. After being raised Catholic she chose to go on a spiritual journey of self-discovery and enjoys embracing all that is possible.