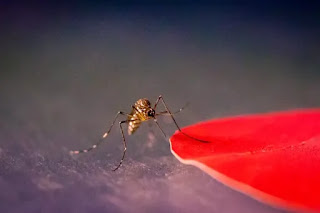 If you’ve ever been eaten alive by mosquitoes at a barbecue while the person sitting next to you escapes unbitten, the color of your clothes might be to blame. New experiments reveal that certain colors attract hungry mosquitoes while others are ignored, a finding that could be used to design new traps or repellents.

Besides being a nuisance at outdoor gatherings, mosquito bites can transmit diseases like malaria, yellow fever, dengue or Zika. Investigating how the bugs find hosts can inform new protective measures. Previous work has found that mosquitoes are attracted to the odor of carbon dioxide from our breath, and in the new study, researchers at the University of Washington examined how that scent primes them to start looking for food.

The team conducted experiments using female mosquitoes of the common species Aedes aegypti, tracking their responses to visual and olfactory cues in a test chamber. They tested how the bugs responded to dots of different colors on the bottom of the chamber, with or without a spray of CO2.

The team found that mosquitoes would fly towards a dot if it was red, orange, black or cyan, and if it had first smelled CO2. Without the gas, the bugs would largely ignore the dots no matter what color they were. However, they still didn’t care for dots that were green, blue, white or purple, even if they’d been primed to hunt with a spritz of CO2.

“Mosquitoes appear to use odors to help them distinguish what is nearby, like a host to bite,” said Jeffrey Riffell, senior author of the study. “When they smell specific compounds, like CO2 from our breath, that scent stimulates the eyes to scan for specific colors and other visual patterns, which are associated with a potential host, and head to them.”

So why are mozzies attracted to reds and oranges specifically? The team says that human skin, regardless of the shade or pigmentation, gives off a strong red-orange signal to mosquito eyes. In follow-up tests, the researchers used cards of different human skin colors, or a bare hand, and found that again, the bugs would fly towards them only if they smelled CO2 first. If the long wavelengths were filtered out, or the hand was wearing a green glove, the insects went back to ignoring them, even with CO2.

Finally, the team conducted the same experiments on mosquitoes that had been genetically modified. If genes responsible for smelling CO2 or seeing long wavelength colors were edited, the bugs didn’t respond to the visual stimulus, indicating both senses are required to ring the dinner bell.

The team says that future work will investigate other cues, like skin secretions, that might help mosquitoes home in on their host. They also suggest that other species that prey on different animals might have different color preferences.

In the meantime, the work could inform new ways to control mosquitoes and prevent bites – from wearing white to making red, CO2-emitting traps.

The research was published in the journal Nature Communications.