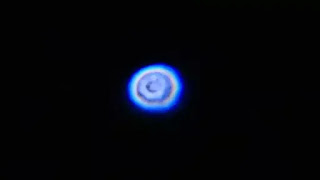 On the night of Monday, Nov. 8, a photographer in Zurich,

Switzerland, who goes by the Twitter handle @Eavix1Eavix aimed his camera at the sky and snapped several pictures of what he aptly described as a "doughnut UFO."

Composed of several bright-blue concentric rings, the flying object looked as much like a spacecraft as a breakfast treat. The photographer suspected he had actually glimpsed SpaceX's Endeavour capsule, which was scheduled to return to Earth that night with four astronauts who had just concluded a 200-day stay on the International Space Station. British tabloid site The Daily Mail even included the eerie photos in a roundup of Endeavour sightings the next day.

But there's a problem with this story: When the Endeavour capsule splashed down a little after 10:30 p.m. EDT that night, it landed half a world away in the Gulf of Mexico — more than 5,000 miles (8,000 kilometers) from Zurich.

While spectators in Louisiana, Alabama and several other Gulf states saw clear views of the capsule streaming across the sky, it is almost impossible that anyone in Switzerland would have been able to see the craft's reentry, Marco Langbroek, an amateur satellite tracker and academic researcher at Leiden University in the Netherlands, told Live Science in an email.

So, if the donut UFO wasn't a SpaceX craft, then what was it? According to Langbroek, the unidentified flying object over Switzerland may not have been flying at all; it could have been the garbled image of a distant star.

"I am pretty certain that the 'donut UFO' on the Swiss images is an out-of-focus image of a bright star," Langbroek said. "It quite looks like it."

Still, other images that the photographer snapped that night seem to show a zig-zagging trail of light behind the object — suggesting it was indeed moving.

According to Jonathan McDowell, an astrophysicist at the Harvard-Smithsonian Center for Astrophysics in Massachusetts, it's possible that the doughnut UFO was the upper stage of a rocket — that is, the small, topmost section of a rocket used to propel a craft into orbit — reentering the atmosphere and burning up.

However, without a precise time frame for the photos, it's difficult to tie the mysterious lights to any known object that was in the sky that night, McDowell told Live Science in an email. (Live Science requested time stamps for the images, but the photographer was unable to provide them.)

Star, rocket or something else entirely? For now, the doughnut UFO over Switzerland is keeping its secrets — and remains a truly unidentified flying object.