Gremlin drone recovered in mid-air for the first time 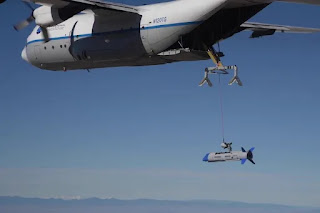 An X-61 Gremlin Air Vehicle (GAV) engages the "recovery bullet" of a C-130 Hercules aircraft
DARPA
Although drones certainly can replace crewed aircraft, DARPA's Gremlins program instead aims to equip military planes with drones that can be deployed and then retrieved for reuse. Now, for the first time ever, one of the drones has been recovered in mid-air.
The basic idea behind the Gremlins program is that instead of risking the lives of human pilots and their expensive aircraft, those planes would stay safely out of reach of enemy forces, releasing swarms of autonomous fixed-wing drones to do the dangerous work. Those drones are being developed by aerospace company Dynetics.

Once each drone's mission was complete, it would then fly up to a safe altitude, where it would be recovered by another human-piloted aircraft. Within 24 hours, that drone could be refurbished by a ground crew and then deployed on another mission – this process could be repeated up to 20 times per drone.

In tests conducted last December, a C-130 Hercules transport plane failed to retrieve three of the drones, which subsequently had to parachute to the ground. According to DARPA, the aerodynamics in flight were more complicated than expected, causing the tests to fail at the moment of engagement. 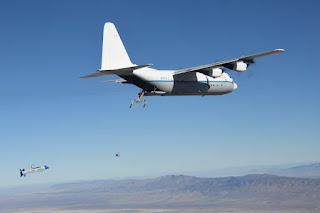 Last month, however, a C-130 did successfully recovery an X-61 Gremlin drone in mid-air. The test flight was conducted at the Dugway Proving Ground in Utah, and actually involved two of the drones – although one was recovered, the other ended up being destroyed. Crews refurbished the recovered drone, then used it in another test flight within 24 working hours.

"Airborne recovery is complex," says Gremlins project manager Lt. Col. Paul Calhoun. "We will take some time to enjoy the success of this deployment, then get back to work further analyzing the data and determining next steps for the Gremlins technology."