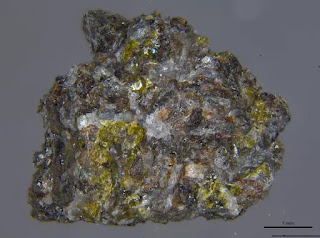 to Earth by China's Chang'e 5 mission confirm that volcanism occurred later than previously known, but also deepen the mysteries surrounding that activity.

China's Chang'e 5 spacecraft collected 3.81 pounds (1.73 kilograms) of lunar dust and rocks from a region called Oceanus Procellarum on the near side of the moon in December 2020. The mission team targeted this landing area because of its apparent lower density of craters, suggesting it was significantly younger than areas sampled by the Apollo and Soviet Luna missions.

The samples were first processed and catalogued, and a first batch of samples were approved for release in June. Since then, various teams of scientists have since been working to learn what the rocks can tell us about the moon and the history of our solar system.

A first paper published in Science in early October dated a fragment of the samples at about 1.97 billion years old. Now a second, published in Nature on Oct. 19, uses a similar dating method but on a different sample, gives an age of 2.03 billion years — very close, geologically speaking. The pair of dates confirms that volcanic activity was taking place in this area of the moon around a billion years after the areas sampled by the Apollo and Soviet Luna missions had become geologically dead.

That finding, in turn, tells scientists about the layer of the moon below the crust. "This means that the mantle had sufficient internal deep mantle heat 2 billion years ago to continue to melt mantle material and produce extrusive mare basalts," James Head III, a professor of geological sciences at Brown University and coauthor on the first paper, told Space.com in an email.

Why the mantle beneath this patch of the moon was still active relatively late in the moon's history remains a mystery, however. Two additional new papers examining the composition of Chang'e 5 samples go against previous thinking on the causes. Existing theories have focused on the heat-producing elements potassium ("K" in the periodic table), rare Earth elements, and phosphorus, together abbreviated as KREEP. Scientists had thought these materials would be relatively abundant in the area, helping to generate the heat required to make the late volcanic activity possible.

But Head's paper and a new study in Nature both examined the composition of a portion of the Chang'e 5 samples and found only moderate KREEP content, suggesting the materials are not required for the late volcanism that created these rocks.

"The jury is still out on how and why the late-stage volcanism occurred," Joshua Snape, a planetary scientist at the University of Manchester, told Space.com. "The lack of a KREEP signature that we identified in the Science paper is definitely significant and seems to be confirmed by the studies published in Nature," he added while noting that low KREEP levels cannot yet be wholly ruled out as a factor.

Adding to the mystery is a lack of water found by a team behind a third new paper, which looked at hydrogen isotope compositions in the rocks. A relatively high water content would have helped lower the melting point of the rock, making volcanic activity easier. But this paper finds the rocks are dehydrated, suggesting that abundant water in the mantle can't explain the moon's youngest confirmed volcanism either.

"Perhaps we need to consider whether tidal heating, caused by the stretching and squeezing by gravitational interactions between the Earth, moon and sun, could be a larger factor than anticipated," Snape said.

All this uncertainty means that the Chang'e 5 samples are helping to further understanding of our celestial neighbor, Head said. "There is a firm understanding of the moon as a planetary body built on the data from Apollo and Luna exploration and sample return. And as is the case in scientific research, this reveals a wide range of 'knowledge gaps' and generates a huge number of outstanding questions."

The Chinese Lunar Exploration Program (CLEP) strategy targeted these young basalts for their first robotic sample return mission and collected samples which are addressing these outstanding questions, Head noted, including the age of the youngest mare volcanism, how long the moon was thermally alive, the role of KREEP, and providing a great reference for estimating the age of other planetary surfaces with the combination of counting craters in the area and the absolute age of the rocks derived from the samples.

"Different research groups will continue to study these samples and look for clues to try and support or refute these ideas," Snape said.

More insights will be coming soon. China's Lunar Sample Expert Committee and China National Space Administration (CNSA) announced on Oct. 19 that the organizations approved 28 applications from 17 research institutes to receive portions of a second batch of Chang'e 5 samples with a total mass of 0.632 ounces (17.936 grams).