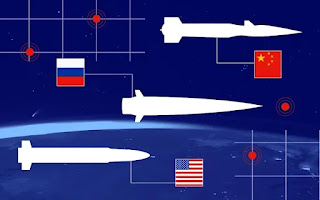 The recent test of a hypersonic nuclear-capable missile

by China is a reminder that any future major war between great powers will look very different to the last.

In addition to hypersonic weapons - launched into space and gliding to targets - we can probably also expect Artificial Intelligence "drone swarms", and autonomous rockets delivering vehicles and supplies to battlefields.

Fighting forces will be smaller, more specialised, and knowledgeable about advanced technology. If that includes British soldiers they will use their biometrics to access real-time US intelligence held in an internet "combat cloud".

Pentagon officials believe any such major conflict could start with an attempted preemptive "cyber Pearl Harbour," in which the enemy, whether it be China or Russia, would try to tak down its communication systems, leaving it fighting blind.

US aircraft carrier superiority would no longer matter as the ships would be sitting ducks for nuclear-armed hypersonic missiles swooping in from space.

There was a muted reaction, at the White House and Pentagon, to reports of China's latest hypersonic missile test in August. That's because it was far from the first.

Hypersonic means travelling above Mach 5, or five times the speed of sound. The DF-17 can do Mach 10 and carry a nuclear warhead. Last year, numerous DF-17s were proudly shown off in a military parade in Beijing.

In August 2018, China tested the hypersonic, nuclear-capable "Xingkong-2," or "Starry Sky-2," blasting it to space and showing off the launch on state television.

Unlike a ballistic missile Hypersonic Glide Vehicles are extremely manoeuvrable, allowing them to evade tracking and defences.

If they are launched into space and re-enter to hit a target there is even less time to react.

The People's Liberation Army believes hypersonic missiles like the DF-17 and Xingkong-2 will make obsolete US missile defence systems deployed in South Korea, Japan and Taiwan.

Meanwhile, the US risks becoming the third wheel in the hypersonic race as it also lags behind Russia.

According to Iain Boyd, an aerospace engineer at the University of Colorado: "It's a race to the moon sort of thing. National pride is at stake."

Two weeks ago Russia successfully test-fired its hypersonic missile "Zircon" from a submerged nuclear submarine for the first time, using mock targets in the Barents Sea.

Zircon is capable of Mach 8 and could be fitted with a nuclear warhead to take out US aircraft carriers in minutes. The captain of a US carrier would have only seconds warning.

More advanced still is the Kremlin's pride and joy, the Avangard hypersonic missile, which has reached a staggering Mach 27.

On Boxing Day 2018 it was launched in the Ural Mountains, separated from its rocket in the stratosphere, and took a zig-zag course for nearly 4,000 miles east across Siberia, before hitting a target on the Kamchatka Peninsula.

The Avangard was brought into service in the Russian military the following year, effectively putting Russia in the lead in the hypersonic race.

The missile can carry a two-megaton nuclear warhead, enough to wipe out a city.

For Mr Putin, it was a "Sputnik moment" and it showed the West was "playing catch up."

It is fair to say there is some paranoia at the Pentagon about America's current predicament.

Officials even recently entertained the possibility that UFO sightings over the US could be hypersonic Chinese or Russian drones.

In particular, the need to do something about China's hypersonic lead has been given huge urgency by the results of classified Pentagon war games set in 2030.

US officials believe the likeliest flashpoint for a Third World War is Taiwan, where a Chinese invasion would trigger an armed conflict between the world's two mightiest powers.

In a large scale war game last October the US found itself crushed.

According to General John Hyten, Vice Chairman of the Joint Chiefs of Staff, US information systems were knocked out immediately, and its strategy of massing forces in one place then left them a sitting target for the Chinese.

In a later simulation the US Air Force managed to narrowly secure victory for America, but only because the simulation included drone technology it doesn't actually have yet.

In 2018 Gen Hyten told Congress the US simply couldn't defend itself against hypersonic missiles.

He said: "We don’t have any defence that could deny the employment of such a weapon against us."

After years of warnings from the Pentagon about the hypersonic danger, the US is now pouring over $1 billion a year into catching up.

In addition, it is prioritising a huge defensive measure, with a plan to put a a "mega-constellation" of potentially hundreds of satellites into space to monitor hypersonic missiles.

Last year, it gave out contracts, including $149 million to SpaceX, to start building satellites with wide field of view (WFOV) and overhead persistent infrared (OPIR) sensors.

SpaceX's bid to build them was described by government officials as "outstanding".

The satellites will be in low Earth orbit, at 1,200 miles up, unlike other military satellites in geosynchronous orbit over 20,000 miles up.

This will allow them to pick up hypersonic missiles more easily. The tracking system is intended to cover the entire planet by the late 2020s.

Offensively, the US is testing of what it calls a HAWC missile (Hypersonic Air-breathing Weapon Concept).

A first major test of its own Hypersonic Glide Vehicle, the ARRW, ended in failure in April. 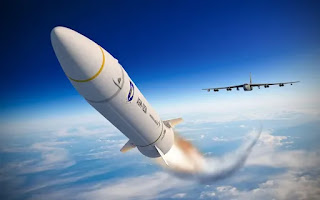 Earlier this year Admiral James Stavridis, the former Nato Supreme Allied Commander Europe, warned that the much vaunted US advantage in aircraft carriers would have become "antiquated" by 2030.

He said: "Autonomous technologies, such as low-cost swarms of air-and sea-based drones coupled with hypersonic missiles, could shift the balance of power on the oceans."

Pentagon officials also believe that, by then, China will have doubled, and potentially quadrupled, its nuclear stockpile.

Some experts suggested China's growing hypersonic capability did not fundamentally change anything.

Jeffrey Lewis, a missile specialist at the James Martin Center for Nonproliferation Studies in California, said: "China already has 100 nuclear-armed intercontinental ballistic missiles that can strike the US.

"Although the [hypersonic] glider is a nice touch."
Posted by Tony Ogunlowo at Tuesday, October 19, 2021