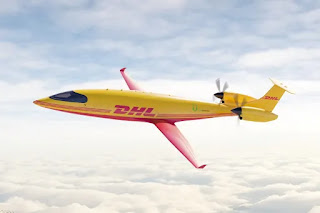 DHL Express has ordered 12 Alice eCargo all-electric aircraft from Eviation, due for delivery in 2024
Eviation
Though Eviation's nine-seat all-electric passenger aircraft is not due to make its first flight until later this year, the company is already looking to diversify into cargo hauling, with the announcement that DHL Express has placed an order for 12 eCargo variants.
We first heard of Eviation's nine-seater all-electric passenger plane in 2019, when the company made a splash at the Paris Air Show. Pitched at small-range routes up to around 1,000 miles (1,600 km), the cruise speed for the Alice aircraft was reckoned to be 276 mph (445 km/h) and per-charge range pegged at 650 miles (1,046 km).

By the time a prototype hit tarmac earlier this year, those figures had been adjusted to 440 nautical miles (815 km) of range from a massive 820-kWh battery pack and a cruise speed of 253 mph (407 km/h) from the three variable-pitch pusher props (one on each wing, and another at the back).

Just last month, the production design was tweaked again, ditching the V-tail setup and making do with two props at the back. Range and cruise speed remained the same. And it's this configuration that appears to be heading DHL's way for the eCargo variant. 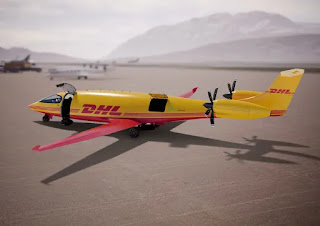 The single-pilot all-electric Alice eCargo has a per-charge range of 440 nautical miles, with the battery pack topped up while the aircraft is on the ground during loading and unloading operations
Eviation

This aircraft will be a single-pilot flyer and be capable of hauling up to 2,600 lb (1,200 kg) of cargo. It's expected that the battery bank will get a quick top up while packages are being loaded or unloaded, requiring 30 minutes or less per flight hour.

The first order from DHL Express is expected to be delivered in 2024, with the company revealing that it's planning to set up "an unparalleled electric Express network."

"With Alice's range and capacity, this is a fantastic sustainable solution for our global network and will be targeted for operations in the southeast and west coast of the United States," said EVP of Global Network Operations and Aviation at DHL Express, Travis Cobb. "Our aspiration is to make a substantial contribution in reducing our carbon footprint, and these advancements in fleet and technology will go a long way in achieving further carbon reductions. For us and our customers, this is a very important step in our decarbonization journey and a step forward for the aviation industry as a whole."

Looking beyond this announcement, the DHL Group is aiming for zero-emissions operations by 2050, and plans to inject €7 billion (~US$8.3 billion) into its sustainability drive by 2030, with the funds going towards electrifying its last-mile delivery vehicles, making its buildings climate neutral, and using sustainable aviation fuels.