HyperPort would fire shipping containers around at transonic speeds 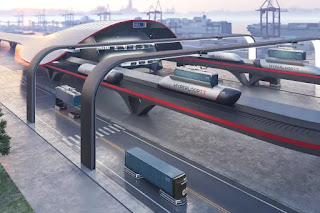 Standard gantry cranes can transfer containers into freight capsules
Hyperloop Transport Technologies
Hyperloop Transport Technologies has presented an ultra-high-speed shipping port logistics system it says can shift up to 2,800 containers a day, covering hundreds of kilometers in minutes – while decreasing emissions wherever it's rolled out.
The whole thing would be like a giant cargo-carrying version of the pneumatic tube systems that once blasted thousands of messages around every hour, back when things were all black and white. As long as those things were around, innovators dreamed of one day building scaled-up versions big enough to move passengers and cargo.

The hyperloop dream, of course, takes it all to the next level. Mag-lev rails eliminate rolling resistance, and hundreds of kilometers of sealed tubes would be vacuum-evacuated to nearly eliminate air resistance. Thus, most of the energy you use to accelerate a capsule up to supersonic speeds (don't worry, there's not enough air in there to create a sonic boom) can be recovered at the other end with minimal los

And that's the model here with HyperloopTT's port logistics system, which it's spent some 20,000 hours developing in partnership with Hamburger Hafen und Logistik AG of Germany, a logistics and transport company that runs a number of container terminals and has a business name that makes it all sound a lot more exciting than it probably is. 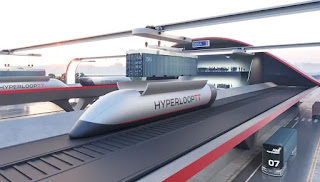 HyperloopTT is one of a few key companies pushing this kind of technology forward. It's already drawn in some pretty decent funding, and employs more than 800 people across its many offices in North and South America, Europe and the Middle East. It's built a full-size prototype passenger capsule measuring 32 m (105 ft) long, featuring the company's own proprietary "Inductrack" mag-lev technology and sensor-embedded "Vibranium" carbon fiber skin.

It's laid out some 320-odd m (1,050 ft) of fully functional test track in France, vacuumed down to hundred-pascal pressure levels lower than what you'd get at altitudes over 38,000 m (125,000 ft). It's long enough to do some initial tests, but obviously not to approach the 1,220+ km/h (760 mph) top speed the passenger system is projected to hit when it's got some room. The company has signed some exciting-looking deals in India, China, the USA and the United Arab Emirates over the last six or so years, but no full-scale implementation seems to be under construction yet.

Fair enough; the World Bank estimated in 2014 that even a regular high-speed train track costs somewhere between US$17 million (in China) and $56 million (in California) per kilometer of track. And that's without putting the whole thing in a huge, airtight tube with vacuum pumps and some of the largest, strongest mechanical pressure valves ever built dotted along its length. The up-front capital cost of a cross-continental supersonic hyperloop system would be epic – but once up and running, HyperloopTT says it could deliver "airplane speeds at freight costs."

The HyperPort development proposes to plug container shipping logistics into the mix, with freight capsules designed to open at the top and accept either two standard 6-meter (20-ft) shipping containers or one double-length 12 to 13.7-m (40 to 45-ft) unit, dropped in and picked up by the same sorts of gantry cranes that already load and unload container ships. Freight speeds would be limited to around 965 km/h (600 mph), so either the passenger pods would have to slow down to this speed as well, or separate tracks would be needed.

It's all very pretty and futuristic-looking, and HyperloopTT says it's designed everything to meet current industry standards. The HyperPort is now being submitted for certification design review, and the company says the next step will be a VR demonstration, to be presented at the ITS World Congress in Hamburg this October.

It's a long and winding road from concept to reality, obviously. And while a solution like this would indeed be much faster and greener than the battalions of trucks that get the job done today, battery and fuel cell trucks are on the way, ready to haul containers to anywhere roads can take them, with zero local emissions

The crazy speeds promised by the HyperPort will come at a hefty cost, but they could cut down a lot of road miles and get things moving even faster in a world whose patience grows ever shorter. I wonder if we'll see this kind of thing get done – vacuum tube transport seemed just years away back in the 1800s too. Between Virgin Hyperloop, HyperloopTT, TransPod and other companies, it seems investors feel this kind of thing is ready for prime time.