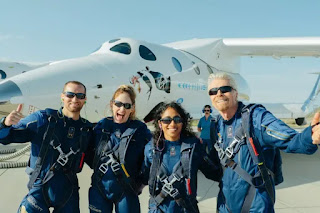 Sir Richard Branson (far right) and the team that flew on VSS Unity
Virgin Galactic
British billionaire Sir Richard Branson almost, but not quite, flew into space on 11th July as a passenger aboard the privately built and operated Virgin Galactic spaceplane, VSS Unity, which took off from Spaceport America, New Mexico at about 10:30 am EDT.
Today's flight marks a major milestone in Virgin Galactic's 15-year struggle to establish a regular service to carry paying passengers and payloads into space. With pilots Dave Mackay and Michael Masucci at the controls of VSS Unity, the rest of the complement consisted of Sir Richard, and mission specialists Beth Moses, Chief Astronaut Instructor; Colin Bennett, Lead Operations Engineer; and Sirisha Bandla, Vice President of Government Affairs and Research Operations.
Though this was billed as a flight into space, Unity did not quite make it. Flying under rocket power at Mach 3 (1,934 knots, 2,225 mph, 3,581 km/h), the craft only reached an altitude of 53.5 miles (86.1 km), while the generally recognized beginning of space is 62 miles (100 km). This marked the 22nd flight of Unity and the fourth rocket-powered spaceflight. 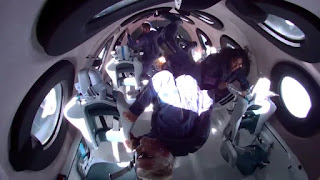 The passengers experienced weightlessness during the flight
Virgin Galactic

During the flight, the passengers and crew saw the curvature of the Earth and experienced a period of weightlessness before reentering the Earth's atmosphere and returning to base as an unpowered glider.

"I have dreamt about this moment since I was a child, but nothing could have prepared me for the view of Earth from space," says Sir Richard. "We are at the vanguard of a new space age. As Virgin’s founder, I was honored to test the incredible customer experience as part of this remarkable crew of mission specialists and now astronauts. I can’t wait to share this experience with aspiring astronauts around the world.

"Our mission is to make space more accessible to all. In that spirit, and with today’s successful flight of VSS Unity, I’m thrilled to announce a partnership with Omaze and Space for Humanity to inspire the next generation of dreamers. For so long, we have looked back in wonder at the space pioneers of yesterday. Now, I want the astronauts of tomorrow to look forward and make their own dreams come true."

The video below shows the flight of VSS Unity.