What if Planet Nine is a baby black hole? 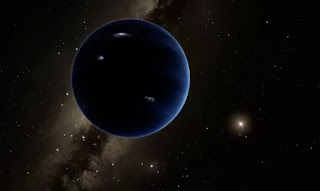 Some astronomers believe there is a massive planet, far beyond the orbit of Neptune, orbiting the sun — but after years of searching, scientists have not found this theoretical world, which they've dubbed "Planet Nine."

This has spurred theorists to consider a radical hypothesis: Perhaps Planet Nine is not a planet but rather a small black hole that might be detectable from the theoretical radiation emitted from its edge, so-called Hawking radiation.

For centuries, astronomers have used variations in planetary orbits to predict the existence of new planets. When a planet's orbit doesn't quite line up with predictions based on everything else we know about the solar system, we need to update our physics (by, say, getting a better theory of gravity) or add more planets to the mix. For example, scientists' inability to accurately describe Mercury's orbit eventually led to Einstein's theory of relativity. And, on the opposite end of the solar system, strange behaviors in the orbit of Uranus led to the discovery of Neptune.

In 2016, astronomers studied a collection of extremely distant objects in the solar system. Called trans-Neptunian objects (TNOs), these tiny, icy bodies are left over from the formation of the solar system, and they sit in a lonely, dark orbit beyond that of Neptune (hence the name).

A few of these TNOs have oddly clustered orbits that align with one another. The probability of that clustering happening by pure random chance is less than 1%, which led some astronomers to suspect that there might be a massive planet out there — something bigger than Neptune that orbits more than 10 times farther from the sun than Neptune does. They dubbed this hypothetical world Planet Nine. The gravity from such an object could draw these TNOs into clustered orbits, the idea goes.

The evidence for Planet Nine isn't conclusive, though. The observations of TNOs may be biased, so astronomers may not have monitored a fair sample, meaning the odd clustering may be an artifact of our observation strategy rather than a real effect. For instance, researchers reported in February that the evidence for Planet Nine — particularly the clustering of TNOs — could be the result of where astronomers point their telescopes, Live Science reported. In other words, these TNOs only appear to be clustering because of our "biased" observations.

Plus, there's the glaring reality that, after almost five years of searching, nobody has found Planet Nine.

If Planet Nine is indeed out there, it may be on a part of its orbit that takes it so far away from the sun that we can't observe it with current technology. But even our deepest, most sensitive scans have turned up nothing.

So now, astronomers have proposed an alternative hypothesis: Maybe Planet Nine isn't a planet at all but rather a small black hole.

Small black holes (and "small," here means planet-size) are very interesting to astronomers. All black holes we know of in the universe come from the deaths of massive stars. And because only the most massive stars (no smaller than, say, 10 solar masses) are big enough to form a black hole, they can only leave behind black holes with a minimum mass of around 5 times that of the sun.

Related: The 12 strangest objects in the universe

So, if scientists can confirm that a small black hole is orbiting the sun, it could provide an intriguing look at one of the greatest mysteries of modern cosmology.

In the 1970s, famed physicist Stephen Hawking theorized that black holes aren't exactly 100% black. Due to a complex interaction between gravity and quantum forces at the event horizon, or boundary of a black hole, he proposed, black holes can indeed feebly emit radiation, slowly shrinking in the process.

And when I say "feebly," I really mean it: A black hole the mass of the sun would emit a single photon — yes, one electromagnetic particle — every year. That's hopelessly undetectable.

But a small, nearby black hole (like, say, Planet Nine) might be more accessible. Previous research had already shown that its Hawking radiation would be too weak to be seen from Earth, but new research, published in January in the preprint database arXiv, investigated if a flyby mission would have a better chance of spotting the Hawking radiation from such a black hole..

Alas, even using a fleet of lightweight, fast spacecraft to scour the outer system, we are very unlikely to spot Planet Nine through its Hawking radiation. The radiation is just too weak, and because we don't know the location of the black hole, we can't guarantee we can get close enough in a chance flyby.

But not all hope is lost. If scientists canmore conclusively pin down the location of the hypothetical Planet Nine using other observations and it turns out to be a black hole, then a targeted mission can fly close to its event horizon and possibly orbit it.

There, we would have direct observational access to one of the most extreme gravitational environments in the universe. No wonder astronomers are excited by the prospect of a black hole in our solar backyard. A mission there would be incredibly expensive and time-consuming. But we have experience with these kinds of long-distance missions in the form of New Horizons, the NASA probe that is currently sailing through the Kuiper belt. It's within our technological reach to design and fly a longer-term version of New Horizons to visit a nearby black hole.

And it would be totally worth it.

Black holes are perhaps the most mysterious objects in the cosmos, and we do not fully understand them. In particular, Hawking radiation itself would teach us about the relationship between gravity and quantum mechanics at small scales. If Planet 9 is a black hole (and that's a big "if" indeed), within a few years we could launch a mission to observe it in detail, and hopefully answer some long-burning questions in physics.

We would have a window into brand-new physics, and it would just be sitting there, waiting for us to look through it.

Paul M. Sutter is an astrophysicist at SUNY Stony Brook and the Flatiron Institute, host of Ask a Spaceman and Space Radio, and author of Your Place in the Universe.