Half-blind Greenland shark possibly spotted in the Caribbean, thousands of miles from its usual home 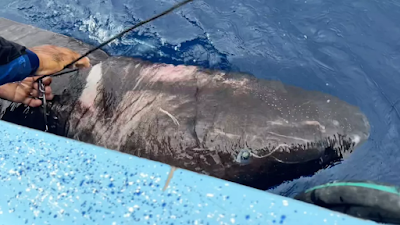 A strange, ancient-looking shark with blue eyes was unexpectedly discovered in the tropical

waters of the Caribbean when it was hooked by Belizean fishers and a biologist on April 22.

The strange shark was caught at Glover’s Reef off Belize, and the boat’s crew instantly knew they’d captured something out of the ordinary. "I knew it was something unusual and so did the fishers, who hadn’t ever seen anything quite like it in all their combined years of fishing," Devanshi Kasana, a doctoral candidate at Florida International University who was part of the crew and led the new study, said in a statement.

With an estimated length of up to 12 feet (3.5 meters), the mysterious shark was released before it could be formally identified. Sleeper sharks are normally found in the ocean's deepest, coldest waters, with Greenland sharks (Somniosus microcephalus) typically dwelling in the Arctic and North Atlantic oceans. The new discovery supports a hypothesis that these sharks may be more widespread than previously thought.

The Caribbean shark discovery took place thousands of miles from where Greenland sharks are normally found. Kasana was working with Belizean fishers to tag tiger sharks (Galeocerdo cuvier) as part of her doctoral research, in collaboration with the Belize Fisheries Department and local fishing communities, when they stumbled upon the unusual shark.

An approaching storm forced the crew to release the shark almost immediately for its own safety, so they weren't able to take a genetic sample. For the new study, Kasana and her colleagues studied footage and images of the shark that were taken during its capture and found that it shared key characteristics with Greenland sharks and other sleeper sharks, including a rounded snout, low and rounded pectoral fins and an eye parasite. The shark was also sluggish and slow-moving like sleeper sharks typically are when they're captured, according to the study.

While the tropics might seem like an odd place for sleeper sharks, the waters surrounding Glover’s Reef are deep, and the slopes along its edges drop from 1,600 feet to 9,500 feet (500 m to 2,900 m) below the surface, according to the statement. Sleeper sharks may be more common in these deep, tropical waters than previously recorded, the researchers suggested.

Greenland sharks are the longest-living vertebrates on Earth. A 2016 study published in the journal Science estimated that the sharks may have a maximum lifespan of at least 272 years. They scavenge and hunt live prey, and have been found with everything from fish to polar bear (Ursus maritimus) remains in their stomachs.

The study was published on July 15 in the journal Marine Biology(opens in new tab).