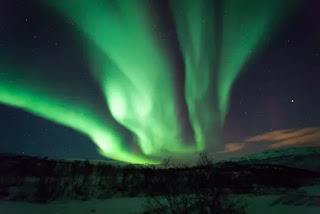 Skywatchers, get set for a storm from the sun — and hopefully an ensuing display of the

After a dead sunspot hurled a ball of plasma, or superheated gas, toward Earth earlier this week, medium-sized auroras may stretch farther south than usual as Earth's atmosphere absorbs the material.

Geomagnetic storms can trigger auroras closer to the equator than is possible during calm conditions, raising hopes for skywatchers. "During such [G2] storms, auroras can seen as far south as, e.g., New York and Idaho — geomagnetic latitude 55 degrees," SpaceWeather.com said in a statement.

The genesis of the event was a "dead" sunspot called AR2987. More scientifically speaking, the sunspot had entered a quiescent period, and then unexpectedly erupted.

"Occasionally," Judge wrote Live Science in an email, "sunspots can 'restart,' with more magnetism appearing later (days, weeks) at the same region, as if a weakness was made in the convection zone, or as if there is an unstable region under the surface that is particularly good at generating magnetic fields beneath."

Auroras are associated with coronal mass ejections, which are sets of charged particles that jolt from sunspots, often after solar flares. If a CME is aimed toward Earth, often the particles can generate auroras in upper latitudes.

Particularly strong CMEs can short out satellites, shortwave radio or power lines, and pose radiation risks for astronauts, but this flare seems to be of the more moderate sort for now.

If you captured a stunning photo of the northern lights let us know! You can send in images and comments to Space.com by emailing spacephotos@space.com. Be sure to let us know your name, where you were observing from and what it was like to see the auroras.