US begins production of its latest air-dropped nuclear munition 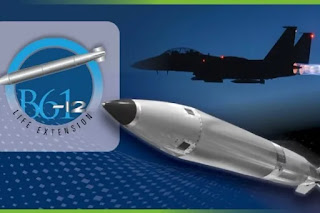 The United States Department of Energy’s National Nuclear Security Administration (NNSA) has begun production of the country's latest air-dropped nuclear weapon variant. The agency announced that on November 23, the B61-12 Life Extension Program First Production Unit rolled off the line as the first of a projected 400 to 500 warheads.

Developed during the Cold War, the B61 has been America's main air-dropped nuclear bomb since it was deployed in 1968. Unlike the larger strategic B83 bomb, it can not only be carried by heavy bombers like the B-52 and the B-2, but also by a wide variety of fighter aircraft flown by the US Air Force and NATO countries.

There are currently four versions of the B-61: the 3, 4, 7, and 11. Three of these are tactical nuclear weapons and one is a strategic nuke, but they share a variable yield design that allows them to explode with a force between 0.3 and 340 kilotons of TNT as desired. In addition, they can carry a variety of fuses and can either drop on a ballistic arc or retard their forward flight by using air drag to drop almost straight down.

Unfortunately, these variants are not only obsolete, they are also so old that they are in danger of no longer functioning. After decades of debate and nine years of development, the US Defense Department decided to upgrade the B61 by introducing a new variant called the B61-12, which refurbishes, recycles, or replaces of all the nuclear and non-nuclear components.

The reason for this is not only to replace three of the previous four variants with one that will remain in service for another 20 years, but also, eventually, to replace the one-megaton yield B83. With the Cold War over, it would be hard to justify fielding such a large bomb in Europe or Asia and by equipping the B61-12 with the Boeing Tailkit Assembly, the new bomb can land within 30 m (100 ft) of its target, which means it can use a much smaller explosive yield of 0.3 to 50 kilotons to destroy it with much less collateral damage.

"With this program, we’re delivering a system to the Department of Defense that improves accuracy and reduces yield with no change in military characteristics, while also improving safety, security and reliability," says Jill Hruby, DOE Under Secretary for Nuclear Security and NNSA Administrator. "The work on the B61-12 will also ensure the warhead can be air-delivered on both current and future platforms to meet Department of Defense requirements."