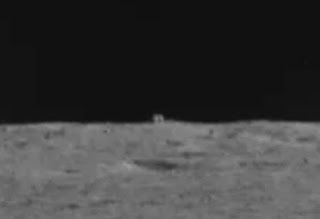 while working its way across Von Kármán crater on the far side of the moon.

Yutu 2 spotted a cube-shaped object on the horizon to the north and roughly 260 feet (80 meters) away in November during the mission's 36th lunar day, according to a Yutu 2 diary published by Our Space, a Chinese language science outreach channel affiliated with the China National Space Administration (CNSA).

Our Space referred to the object as a "mystery hut" (神秘小屋/shenmi xiaowu), but this a placeholder name rather than an accurate description.

Team scientists have expressed a strong interest in the object and Yutu 2 is now expected to spend the next 2-3 lunar days (2-3 Earth months) traversing lunar regolith and avoiding craters to get a closer look, so updates can be expected.

A likely explanation for the shape would be a large boulder which has been excavated by an impact event.

The solar-powered Yutu 2 and Chang’e 4 lander made the first ever landing on the far side of the moon on Jan. 3, 2019, and the rover has been rolling through the  115-mile-wide (186 kilometers) Von Kármán crater ever since.

Chang'e 4, like its name suggests, is China's fourth moon mission and second to deliver a rover on the moon. The Chang'e 1 and 2 missions were orbiters, with Chang'e 3 landing on the near side of the moon with the first Yutu rover. China has also launched the Chang'e 5 T1 test mission around the moon and the Chang'e 5 moon sample return mission.