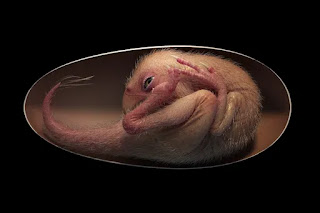 An illustration depicting the oviraptorosaur embryo, in a very bird-embryo-like orientation
Lida Xing
For some time now, it has been known that modern birds are direct descendants of the dinosaurs. Now a fresh analysis of a fossilized dinosaur embryo has brought that prehistoric relationship into a new and particularly sharp focus.
Back in 2000 a suspected dinosaur egg fossil was acquired by Mr. Liang Liu, director of China's Yingliang Group mining and stone sales company. When the company's Yingliang Stone Nature History Museum was being constructed in the 2010s, the fossil was essentially rediscovered. The amazingly complete fossil embryo inside of it was then revealed.
Known as "Baby Yinglang," the 72- to 66-million-year-old embryo was found in rocks dating from the Late Cretaceous period, in the Ganzhou region of southern China. Based on its deep, toothless skull, it was determined to be an oviraptorosaur, which were a likely omnivorous family of feathered dinosaurs.

The actual fossil, which is said to be one of the most complete dinosaur embryos ever found
Xing et al., 2021
The egg itself is approximately 17 cm long (6.7 in), while the embryo's curled-up body is estimated to measure 27 cm (10.6 in) in length if pulled straight … and the manner in which it is curled is the subject of the new research.

In an international study led by Britain's University of Birmingham and the China University of Geosciences, it was found that the embryo's posture is very similar to the central-nervous-system-activated "tucking" behavior of modern bird embryos.

More specifically, the oviraptorosaur had its head tucked down, its legs folded on either side of its body, and its back arched to follow the curve of the blunt end of the egg. Such an orientation has never before been observed in a non-avian dinosaur embryo. In birds, however, that commonly adopted posture has been found to greatly increase the chances of a successful hatching – an unsuccessful hatching typically results in death.

Previously, tucking was thought to be unique to birds. This new discovery, however, suggests that it may have originated in the theropod group of dinosaurs, of which the oviraptorosaurs were members. 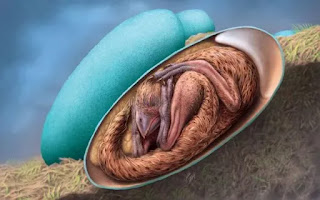 An illustration depicting the oviraptorosaur egg in its nest
Julius Csotonyi

"This little prenatal dinosaur looks just like a baby bird curled in its egg, which is yet more evidence that many features characteristic of today’s birds first evolved in their dinosaur ancestors," says the University of Edinburgh's Prof. Steve Brusatte.

A paper on the research – which also involved scientists from the Yingliang Stone Nature History Museum, the Chinese Academy of Sciences, and Canada's University of Calgary – was recently published in the journal iScience.

Email ThisBlogThis!Share to TwitterShare to FacebookShare to Pinterest
Labels: History