Cockatoos make advanced toolsets, the first non-primates known to do so 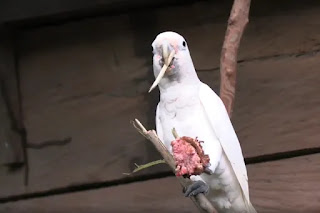 A Goffin's cockatoo crafting one of three tools to help it crack into fruit
O'Hara et al. /CC BY 4.0
Many animals are known to make tools to help them find food or achieve other everyday goals, but advanced toolmaking skills are rarer. Now, wild cockatoos have been seen making sets of tools, each with their own design and purpose, and using them in a specific order to crack into fruit. This behavior places them in an exclusive club that previously only included humans and some primates.
Native to Indonesia, Goffin’s cockatoos are very intelligent, and they aren’t afraid to show it. In past captive studies, a particularly crafty little cocky named Figaro has been seen to make rakes to reach food placed just outside his cage, and teach other birds how to do it. But whether wild cockatoos do the same, and to what extent, remained a mystery.

And now, it seems that they can. Researchers at the Tanimbar Goffin Lab in Indonesia studied the cockatoos for years, keeping flocks of 15 in an aviary for a few months at a time before releasing them. Nothing much happened when the birds were given basic foods like papayas and coconuts – but things changed once they were given a more challenging fruit called a sea mango, or a wawai.

This small fruit has a tough pit full of seeds, which are apparently tasty and nutritious enough to work for. The scientists watched as one of the cockatoos quickly crafted not one, but three different types of tools, used in sequence to pry the pit open.

First, the bird bit off the soft flesh of the fruit, surrounding the pit. Then, he snapped off a small piece of a branch from a nearby tree, and used his knife-like beaks to remove the bark and whittle the wood into a wedge shape. Using his tongue, he pushed the wedge into the pit to open it up.

Next, the cockatoo made a sharper, narrower tool to break through the tough inner skin around the seeds. And finally, he made a third, flatter tool that he used like a spoon to scoop out the seeds into his mouth.

Only two of the 15 birds in the flock were seen to make these tool kits, but the team says that they’ve found some of these tools discarded in the wild, including one still stuck in a wawai fruit. That suggests that the cockatoos are passing the knowledge between individuals, in a kind of cultural learning previously seen in other species like dolphins and primates.

But this kind of sequential use of different tools is surprisingly complex for birds, the team says. The behavior has previously only been observed in humans, chimpanzees and capuchin monkeys.

It’s not the first example of advanced toolmaking in birds though. A few years ago crows were seen assembling tools from separate pieces, exhibiting a different kind of ingenuity assumed to be out of their reach.

The new research was published in the journal Current Biology. The cockatoos can be seen making tools in the video below.