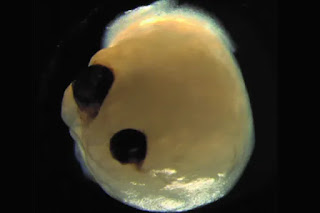 A brain organoid, with two optic cups that can detect light
Elke Gabriel/CC BY-NC-SA
Researchers have made a striking breakthrough in lab-grown mini organs. Using induced pluripotent stem cells (iPSCs), the team induced brain organoids to develop rudimentary eye structures that can sense light and send signals to the rest of the brain.
The human brain is one of the most ridiculously complex things nature has ever concocted, so to help us understand it better, scientists have been making miniature versions in the lab. Skin cells are taken from adult donors, reverted back into stem cells, and placed into a culture that mimics the environment of a developing brain, encouraging them to form different brain cells. The end result is a pea-sized, three-dimensional brain model that can be used to study development, disease or the effects of drugs.

Now, research led by the University Hospital Düsseldorf has taken it a step further. The team has grown brain organoids complete with optic cups, vision structures found in the eye where the optic nerve meets the retina. They grew symmetrically at the front of the mini-brain, giving the organoid a striking visage.

But most importantly, these optic cups were functional. They contained a diverse range of retinal cell types, which formed neuronal networks that actually responded to light and sent those signals into the brain. Lens and cornea tissue was also formed.

“In the mammalian brain, nerve fibers of retinal ganglion cells reach out to connect with their brain targets, an aspect that has never before been shown in an in vitro system,” says Jay Gopalakrishnan, senior author of the study.

Using stem cells from four donors, the team made 314 brain organoids in 16 batches, with around 72 percent of them forming optic cups. These structures began to appear by the 30-day mark and matured within 50 days, which the team says is a similar time frame to when human embryos develop retinas. The study shows that the technique is reproducible, although further work will need to be done to keep them viable for longer, in order to use them for study. 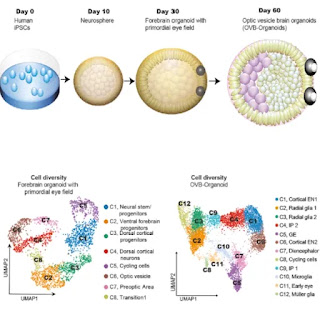 A schematic of how the brain organoids develop to include optic cups
Gabriel et al./Cell Stem Cell/CC BY-NC-SA

“Our work highlights the remarkable ability of brain organoids to generate primitive sensory structures that are light sensitive and harbor cell types similar to those found in the body,” says Gopalakrishnan. “These organoids can help to study brain-eye interactions during embryo development, model congenital retinal disorders, and generate patient-specific retinal cell types for personalized drug testing and transplantation therapies.”

While these brain organoids remain very rudimentary, if they continue to advance they might one day raise ethical concerns. Previous studies have already detected brain waves in two-month-old organoids roughly equivalent to those of pre-term babies, and it’s possible that further development could lead to mini-brains with some form of self-awareness or even consciousness. Sensory input like vision might be a key ingredient for this. It’s an issue that scientists will need to keep an eye on.

The research was published in the journal Cell Stem Cell.