Inside of world's largest airship revealed in stunning images 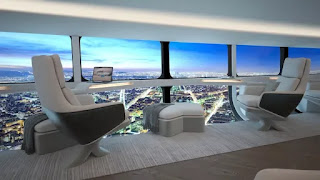 The Airlander 10 would have a roomy interior for rides that could start as soon as 2025. (Image credit: Hybrid Air Vehicles)

New details about one of the world's largest aircraft, Airlander 10,

reveal a spacious cabin with floor-to-ceiling windows (and plenty of legroom) inside the blimp-like exterior. And the futuristic aircraft will be loads better for the environment.

British company Hybrid Air Vehicles recently released concept images of its forthcoming airship, which is 299 feet (91 meters) long and 112 feet (34 m) wide, with the capacity to hold about 100 people. But rather than being crammed in like sardines, passengers will be treated to floor-to-ceiling windows and the kind of space and legroom commercial airlines currently reserve for business-class customers.

The firm thinks the vehicle, which is expected to enter service by 2025, will soon challenge conventional jets on a number of popular short-haul routes, thanks to its improved comfort and 90% lower emissions.

"The number-one benefit is reducing your carbon footprint on a journey by a factor of 10," Mike Durham, Hybrid Air Vehicles' chief technical officer, told Live Science. "But also, while you're going to be in the air a little bit longer than you would if you were on an airplane, the quality of the journey will be so much better." 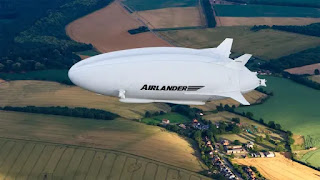 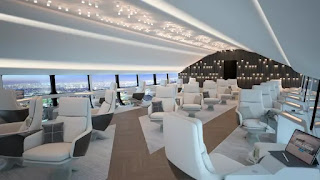 The Airlander is so much greener than a passenger plane, Durham said, primarily because it relies on a giant balloon of helium to get it into the air. In contrast, airplanes need to generate considerable forward thrust with their engines before their wings can provide the lift to get them airborne.

Once it's in the air, the airship relies on four propellers on each corner of the aircraft to push it along. In the first generation, two of these propellers will be powered by kerosene-burning engines, but the other two will be driven by electric motors, further reducing the vehicle's carbon emissions. By 2030, the company expects to provide a fully electric version of the Airlander.

Rather than conventional batteries, liquid hydrogen fuel cells will power the Airlander's electric motors. Liquid hydrogen can store much more energy for a given weight than batteries, Durham said. The hydrogen will be kept in cryogenically cooled tanks in the hull and pumped to the fuel cells, where it will react with oxygen to generate electricity.

For some intercity journeys of around 100 to 250 miles (160 to 400 kilometers), Durham said traveling from one city center to another is only slightly slower, thanks to the airship's ability to land in much smaller spaces or even on bodies of water.

For example, the company estimates that traveling between Seattle and Vancouver would take just over 4 hours by Airlander compared with slightly more than 3 hours by plane. Crucially, it would produce only 10 lbs. (4.6 kilograms) of carbon dioxide per passenger over that journey, compared with 117 lbs. (53 kg) for a conventional plane.

But considering the journey only takes 2.5 hours by car, passengers are more likely to be wooed by the aircraft's creature comforts than it's speed. On that front, Durham is confident the Airlander will be a much more pleasant experience than the alternatives. The cabin is such a small part of the vehicle's overall cross section that it has little effect on drag, which means the company has been able to make the airship much more spacious than a streamlined jet ever could be.

The floor-to-ceiling windows, combined with a cruising altitude below 10,000 feet (3,040 meters), means passengers will get spectacular views. And because the gigantic, helium-filled hull separates the engines from the cabin, there's little vibration and almost no noise. The aircraft is also largely unaffected by turbulence.

"Once you're up into the climb, you're pretty much running in a near-silent flight environment," Durham said.