Meet the marine worm with 100 butts that can each grow eyes and a brain! 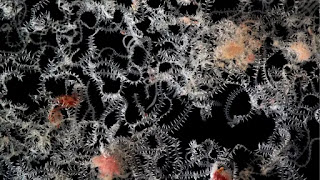 Small fraction of a single living specimen of Ramisyllis multicaudata, dissected out of its host sponge and seen through the stereomicroscope. (Image credit: Guillermo Ponz‐Segrelles/M. Teresa Aguado/Christopher J. Glasby)

How many butts is too many? One is usually enough for most animals

— unless you're a type of marine worm with a body that divides from a single head into dozens of different directions, and each of those branches ends in a butt.

The worms' weirdness doesn't stop at multiple butts, either. When the worms are ready to reproduce, their butts can grow eyes and a brain.

At this point, you probably have questions; unsurprisingly, scientists did, too. So they peered inside the branching bodies of this many-butted ocean weirdo, which is named Ramisyllis multicaudata and lives in waters near Darwin, Australia. For the first time, researchers have described the oddball creatures' internal anatomy, revealing that the worms' insides are just as peculiar as their outsides.

R. multicaudata is a segmented worm, or annelid, in the family Syllidae. There are about a thousand described species in that family, but only two of them grow massive, branching bodies: R. multicaudata and the deep-sea worm Syllis ramosa.

Branching bodies are quite common in plants and fungi, but in animals this type of body plan is virtually unheard of, according to the Australian Academy of Science. When biologist William McIntosh described S. ramosa in 1879, he remarked on this surprising ability, noting that the annelid had "a furor for budding," scientists reported in a new study, published April 4 in the Journal of Morphology.

However, the inner workings of these free-swimming stolons — and of the worms' internal anatomy — was almost entirely unknown. The researchers therefore turned to microscopy, X-ray computed microtomography (micro-CT) scans, tissue staining and chemical analysis to identify the worms' organs and anatomical systems, and to reconstruct them digitally in 3D. 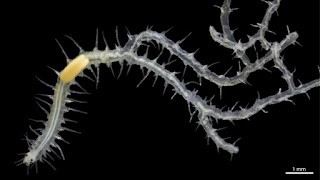