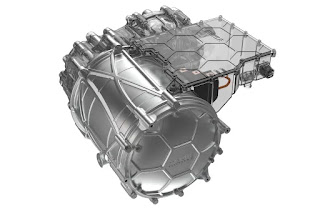 Mahle's highly efficient new electric motor ditches rare earth metals altogether, instead using contactless induction to feed power to coils in the rotor
Mahle
Magnets, typically using rare earth metals like neodymium, are found at the heart of most electric vehicle motors. It's nice to have a permanent source of powerful rare earth magnetism in your rotor, because using powered coils instead means you have to somehow transfer electricity from the battery through to the coils in a spinning rotor. That means you'll need a sliding point of contact, and sliding points of contact develop wear and tear over time.
Permanent magnets, though, come with their own baggage. Ninety seven percent of the world's rare earth metal supply comes out of China, and state control over such a crucial resource across a number of high-tech industries has been a serious issue in the past. Official accounts differ about why China decided to restrict rare earth exports back at the start of the decade, as official accounts tend to do, but the result either way was a 750-percent leap in neodymium prices and a 2,000-percent leap in dysprosium prices.

Could these metals be produced elsewhere? Yes. They're not as rare as the name might suggest. But wherever they're mined, the only way to economically turn them into magnets is to send them to China for processing – nowhere else in the world is set up for the task, and nobody can compete against China's minimal labor costs and environmental regulations.

So it's a heavy bat China can swing in trade negotiations, and a genuine supply line security issue for other countries. Several companies, including BMW, Audi, Renault and others, are making at least some of their electric motors without magnets already; everyone else has their eye on new technology in this area.

And that's the context into which German company Mahle has just announced a new electric motor that sounds like it solves a lot of problems in a very tidy manner. 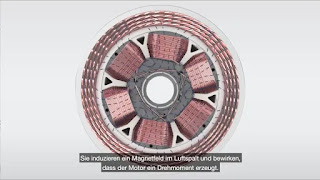 Rather than magnets, the rotor uses wound coils
Mahle

The new Mahle design uses no magnets, instead using powered coils in its rotor. Unlike previous efforts, it transfers power to the spinning rotor using contactless induction – so there are basically no wear surfaces. This should make it extremely durable – not that electric motors have a reputation for needing much maintenance

The lack of expensive metals should make it cheaper to manufacture than typical permanent-magnet motors. Mahle says the ability to tune and change the parameters of the rotor's magnetism instead of being stuck with what a permanent magnet offers has allowed its engineers to achieve efficiencies above 95 percent right through the range of operating speeds – "a level that has only been achieved by Formula E racing cars."

It's also particularly efficient at high speeds, so it could help squeeze a few extra miles out of a battery in normal use. The company says it'll scale nicely from sizes relevant to compact cars up to commercial vehicles. 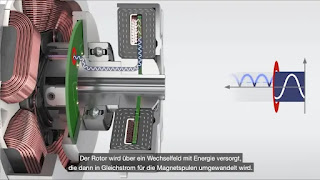 A wireless transmitter sends power to the rotor, using an alternating field that's converted into direct current for the magnet coils

Our magnet-free motor can certainly be described as a breakthrough, because it provides several advantages that have not yet been combined in a product of this type,” says Dr. Martin Berger, Mahle's VP of Corporate Research and Advanced Engineering. “As a result, we can offer our customers a product with outstanding efficiency at a comparatively low cost.”

Mass production is about two and a half years away, according to IEEE Spectrum, and Mahle has not yet nominated which auto manufacturers it's dealing with, but test samples are already starting to circulate.