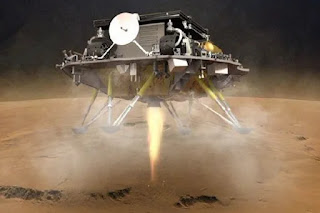 An artist's impression of the Tianwen-1 lander module touching down on Mars
China National Space Administration
China has taken another big step forward in its ambitious space program, successfully landing its Tianwen-1 probe on Mars to become just the third nation to touch down on the Red Planet. Onboard is the country's Zhurong lander, which is currently surveying the surrounding environment and will soon be rolled out to study the Martian environment from the surface.
China's Tianwen-1 mission was launched in July last year and carried an orbiter, lander and rover towards Mars over a journey lasting nearly seven months. After entering the planet's orbit in February, the spacecraft spent more than two months searching for a landing site, before mission scientists settled on a plain in the northern hemisphere called Utopia Planitia

In the early hours of Saturday morning (China time), an entry capsule carrying the lander and rover separated from the orbiter and plummeted through the atmosphere. This involved deploying a parachute to slow its descent, which was later jettisoned along with the outer shield, and firing up a rocket as it neared to surface to slow its speed to almost zero, before identifying and avoiding obstacles to land safely on a flat section of the plain.

Like other Mars landing missions, this complex pre-programmed landing sequence had to be carried out without human intervention due to a delay in sending commands via radio signals from Earth. Mission control only confirmed its success after the rover unfurled its solar panels and antenna to phone home more than 17 minutes later.

"Each step had only one chance, and the actions were closely linked," says Geng Yan, an official at the Lunar Exploration and Space Program Center of the CNSA, according to state-run news agency Xinhuanet. "If there had been any flaw, the landing would have failed."

Named after the god of fire in Chinese mythology, the Zhurong rover will remain aboard the lander for seven or eight days after the landing, observing its surroundings and carrying out self-checks before heading down to the surface. From there, the six-wheeled rover will use its cameras, sub-surface radar, magnetic field detector and other instruments to study the planet from its surface across an expected 90-day lifetime. But already the exploratory mission is starting to bear fruit.

"According to the images sent back from the orbiter earlier, we've found a large crater with a diameter of about 620 meters (2,000 ft) close to the landing area of the probe," said Zhao Shu, a senior engineer at the National Astronomical Observatories under the Chinese Academy of Sciences, according to Xinhuanet.

The accomplishment is a monumental one for the China National Space Administration, making China the third nation after Russia and the US to land a spacecraft on Mars. The Soviets sent a pair of rovers to the Martian surface in 1971, though a crash landing saw communications cut out just 20 seconds later. This therefore makes China only the second country to successfully land and operate a Martian rover.

And it's not just Mars that the China National Space Administration has in its sights. The agency also recently managed to bring back lunar rocks and dust to Earth for the first time in decades, land the first ever spacecraft on the far side of the Moon, and is piecing together its own space station, with the first module launched last month.