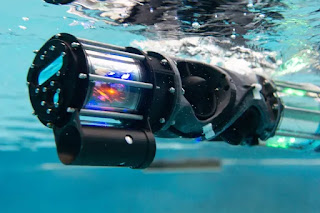 Scientists at Carnegie Mellon University (CMU) have spent a

number of years developing modular snake-like robots for all kinds of purposes, and the latest adaptation sees its serpent-inspired tech headed underwater. The team has developed a submersible SnakeBot capable of navigating tight spaces, which the scientists hope will see it used to inspect ships for the military, or investigate underwater pipes for blockages.

The latest version of CMU's SnakeBot is dubbed the Hardened Underwater Modular Robot Snake (HUMRS), and like its predecessors, features a modular, reconfigurable design. We have seen previous versions packed with everything from force-sensing feet to tank-style treads, or cameras to investigate pipes in nuclear power plants and surgical tools to grasp and cut tissue in human patients.

This time around, the team has pieced together modules that include thrusters, buoyancy control systems, rotary articulation devices, inspection sensors and manipulation grippers to form an underwater version. The HUMRS was recently plunged into the pool at the university, where it made its way through underwater hoops to demonstrate its maneuverability. 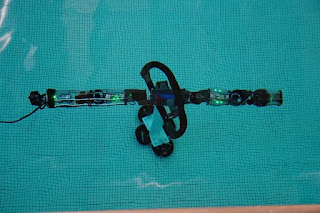 "We can go places that other robots cannot," said Professor of Robotics at Carnegie Mellon University, Howie Choset. "It can snake around and squeeze into hard-to-reach underwater spaces."

One of the more promising applications for the submersible SnakeBot, in the eyes of the team, is to carry out inspections of navy ships out at sea. When these vessels incur damage, divers are sent to investigate or it is hauled into a dry dock or back to port. Having a robot on hand that could be deployed to assess the damage instead would be far more efficient.

"If they can get that information before the ship comes into a home port or a dry dock, that saves weeks or months of time in a maintenance schedule," said project team member Matt Fischer, who served in the Navy for three years. "And in turn, that saves money."

Other potential applications include inspecting underwater pipes or tanks, and assessing offshore oil rigs and other infrastructure.

"The distinguishing feature is the robot's form factor and flexibility," says Nate Shoemaker-Trejo, a mechanical and mechatronics engineer at CMU. "The smallest versions of regular submersibles are usually blocky, one-piece arrangements. The robot snake is narrow and jointed. The end result is that an underwater robot snake can squeeze around corners and into small spaces where regular submersibles can't go."