US military takes two high-profile members of a British ISIS cell into custody. 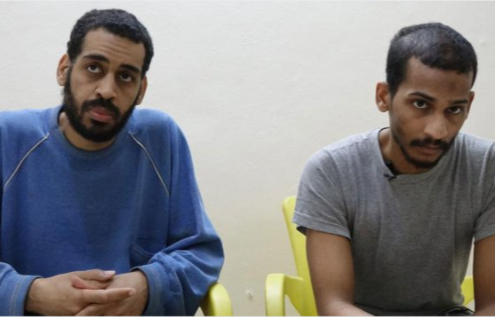 The US military has taken two high-profile members of a British ISIS cell into custody as officials said the transfer was made on Wednesday, October 9th.

This comes amid US concerns that the Turkish offensive in northeastern Syria could result in ISIS prisoners escaping from undermanned prisons guarded by Syrian Democratic Forces inside Syria.

President Donald Trump said Wednesday that some of the most dangerous ISIS prisoners had been moved, "putting them in other areas where it's secure," a possible reference to the high-profile British ISIS detainees.

A top US official said there are plans to bring the two ISIS members, Alexanda Kotey and El Shafee Elsheikh, to the US for prosecution. The two, who have been held in northern Syria by the US-backed Syrian Democratic Forces for more than a year, were part of an ISIS cell dubbed the "Beatles."﻿
Posted by Tony Ogunlowo at Thursday, October 10, 2019