One of world's tallest skyscrapers opens in Beijing 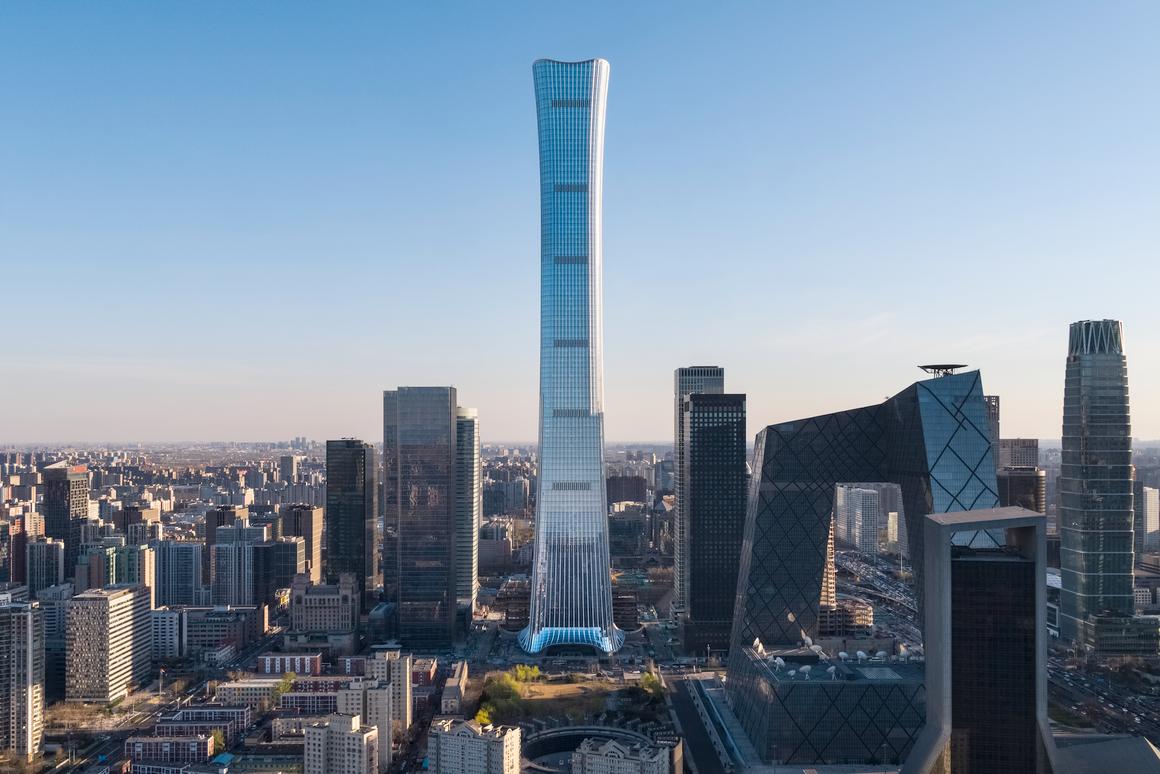 CITIC Tower's design is inspired by an ancient Chinese ceremonial drinking vessel
H.G. Esch
Shortly after the inauguration of one of the world's largest airports in Beijing, the city is now host to another massive new building, this time a skyscraper by Kohn Pedersen Fox (KPF). Now officially open for business, the CITIC Tower rises to a height of 528 m (1,732 ft), making it the 10th tallest building worldwide.
The CITIC Tower also involved TFP Farrells and Arup, and is located in Beijing's business district, a stone's throw away from the CCTV building. It draws on the country's ancient past for design inspiration and its overall form echoes that of the zun, which is a ceremonial drinking vessel used in Bronze Age China.
The glazed skyscraper's base has a width of 78 m (255 ft), while its middle section tapers to 54 m (177 ft), before increasing again to 69 m (226 ft) in width at the top. This lends the building an almost hourglass appearance.
Additionally, it increases the amount of office space available at the very top, which is unusual for such a tall building. Most supertall skyscrapers taper or at least maintain the same width as they rise, due to the heavy wind loads that batter towers at such great heights.`


"KPF’s goal for CITIC Tower was to create a centrepiece for the new CBD [Central Business District] that would elicit harmony with the historic capital while proposing aspirational and contemporary architecture," says Design Director Li Lei. "We abstracted the zun’s elegant form and focused on its gradual transformation, applying this motif across immense scales: from the tower’s overall massing, all the way down to its curtain wall, entry vestibule, and interior detailing. In all, we feel that CITIC Tower’s graceful skyline profile, dynamic street level presence, and transparent lobby and observation hall answer its architectural mission."
The skyscraper's interior has a total floorspace of 437,000 sq m (roughly 4.7 million sq ft), spread over 108 floors. Most of this is given over to office space, though there is also an observation deck. It serves as headquarters for both the CITIC Group and CITIC Bank, hence its name, as well as other office spaces and a business centre. Workers navigate the building using 101 elevators and it features a helipad on its roof.

CITIC Tower's interior measures 437,000 sq m (roughly 4.7 million sq ft)
H.G. Esch
CITIC Tower is just the latest supertall skyscraper designed by KPF that has made the top 10 world's tallest ranking. It joins the Ping An Finance Centre, Lotte World Tower, and CTF Finance Centre, all of which are in Asia.