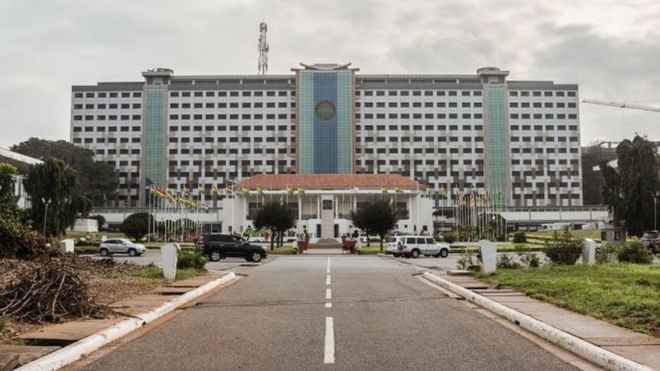 Ghanaian security forces have arrested and are questioning three alleged coup plotters after their plans to target the presidency were foiled.
In a statement posted on Twitter, Ghana's government said the plot had "the ultimate aim of destabilising the country".
Military personnel were involved in obtaining weapons, the statement said.
According to the government, the group were aiming to recruit and radicalise a base of young people.
A stash of weapons and ammunition was found following 15 months of surveillance.
This included six pistols, three smoke grenades, 22 IEDs, two AK47 magazines and one long knife.
Computer equipment, a voice recorder and a Ghanaian passport were also among the list of items seized.
Security analysts have downplayed the claims of a coup plot, saying the group lacked the weapons and mass movement required.
The government statement said the three men arrested, named as Frederick Yao Mac-Palm, Ezor Kafui and Bright Allan Debrah Ofosu, had set up a group targeting young people.


Known as Take Action Ghana (TAG), the aim was to mobilise the youth for "nation-building".
But this was a guise for their intention to "build a support base of youth, and radicalise them against the political authority in Ghana".
The alleged coup plotters, one of whom is a doctor, had started procuring weapons and improvised explosive devices.
The statement said they procured some chemicals that were to be used to concoct weapons from a hospital.
The government has also accused military personnel of plotting to obtain weapons.
The BBC's Favour Nunoo in the capital, Accra, said that although there is a lot of dissatisfaction in Ghana at the moment, this alleged plot still comes as a surprise.
When President Nana Afuko-Addo was elected at the end of 2016, he promised he would do all in his power to live up to voters' hopes and expectations. But those hopes and expectations were high and have not been met, our correspondent said..
Ghana will go the polls in next year.