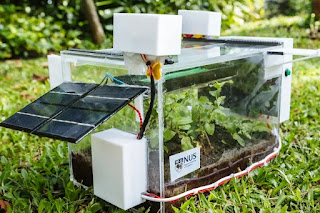 In many parts of the world there may not be much precipitation, but there is a fair amount of water vapor in the air – particularly at night. An experimental new device draws in that vapor, then uses it to irrigate edible plants.
Known as the SmartFarm, the small-scale prototype was designed by a team at the National University of Singapore, led by Asst. Prof. Tan Swee Ching. It's essentially a transparent acrylic box that has kangkong vegetable plants growing in soil on the bottom – on top, a hydrogel panel lies beneath a solar-powered motorized cover.

The copper-based hydrogel is very absorbent, readily drawing water vapor from the cool night air while the cover is open. An integrated timer closes it at dawn, with the sun's rays subsequently heating the hydrogel through the clear cover material. The gel responds by releasing its stored water in the form of vapor, which condenses into liquid on the inside of the cover.

When that cover periodically slides open throughout the day, the condensation gets wiped off along the inside edges of the box and trickles down the insides of the walls, running into the soil. According to the scientists, the gel can absorb up to 300 times its weight in water at night. During the day, it releases that water at an hourly rate of 2.24 grams of water per gram of gel.

In fact, the hydrogel was previously tested by the Hawaii Space Exploration Analog and Simulation (HI-SEAS) research project, as a possible means of controlling humidity in greenhouses on space missions. And what's more, the released water meets World Health Organization standards for drinkability.

The team is now investigating methods of scaling the technology up for large-scale applications, which could potentially include multi-tiered, produce-growing urban rooftop setups.