Russia is going back to the moon this year 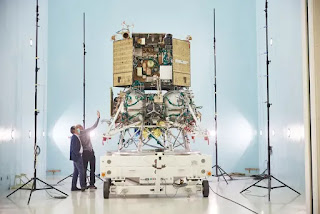 for a new series of missions that will take the nation back to the moon.

The first of those missions, dubbed Luna 25, is scheduled to launch this October, ending a 45-year drought of Russian moon landings with the nation's first arrival at the south pole, where, like everyone else targeting the moon, Russian scientists want to study water locked below the surface in permanent ice.

"The moon is the center of our program for the next decade," Lev Zelenyi, scientific advisor for the Russian Space Research Institute, said during a virtual presentation on March 23 hosted by the National Academy of Sciences.

Russia has plenty of company in sketching out ambitious lunar exploration programs. The United States is targeting human exploration with its Artemis program, which also incorporates plenty of robotic moon missions. In December, China ferried the first fresh lunar samples to Earth in decades in a still-unfolding series of missions dubbed Chang'e. India and Israel have both promised successor spacecraft after their lunar landers — dubbed Chandrayaan-2 and Beresheet, respectively — crash-landed on the moon in 2019.

But only the U.S. can match Russia's lunar heritage, which Russia is consciously tapping into by picking up the Luna series name and enumeration from where they left off in 1976. "We want to show some consistencies," Zelenyi said.

Hence, Luna 25. The lander that will launch in October is designed to study ice permanently frozen below the moon's surface, which would-be explorers hope to tap into as a resource, and to evaluate the dangers posed by sharp fragments of lunar dust. As it lands, the spacecraft will use a European-built camera to advance the European Space Agency's future lunar missions.

But Luna 25 is only the beginning, Zelenyi emphasized, walking through a total of five lunar missions in various planning stages. In 2023 or 2024, Russia plans to launch Luna 26, this time an orbiter that would look for magnetic and gravitational anomalies in the moon and capture high-precision images of potential landing sites.

Then, in 2025, it would be back to the surface with Luna 27, which Zelenyi called "I think the most important." Like the lander arriving this year, Luna 27 will target the moon's south pole and carry European landing software. But also on the robot courtesy of the European Space Agency would be a first: a drill that can gather south-pole lunar rock without melting compounds like water ice found in the material.

In addition, the lander will carry a suite of instruments designed to study how the solar wind, a constant stream of charged particles flowing out of the sun and across the solar system, affects the lunar surface.

The final two missions in the Luna series as described by Zelenyi don't yet have launch dates. But Luna 28, also known as Luna-Grunt, would build directly on its predecessor by bringing back to Earth cryogenically stored samples from the lunar south pole that would retain water ice and other so-called volatile compounds.

"It's sample return, but a different sample return than has been done earlier," Zelenyi said. "It will be ... not just regolith [lunar dirt] but all volatiles and cryogenic inclusions to it, which is technically challenging."

Finally, Luna 29 would carry a new Lunokhod rover, harkening back again to Soviet missions. Lunokhod-1 became the first successful rover on another world in 1970 and spent 10 months exploring the region dubbed Mare Imbrium, or the Sea of Rains.