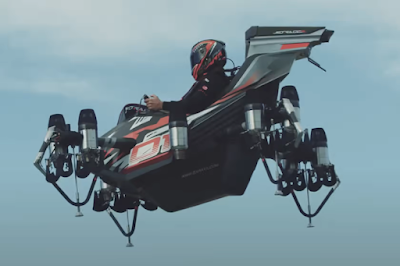 When we last saw Franky Zapata back in May, he was spinning uncontrollably down into the water from a serious height in a terrifying jetboard crash. But the flying Frenchman is back to launch a new, high-speed personal aircraft called the JetRacer.

Zapata has already built a resume most would be proud of. A former jet ski world champion, he went on to invent the Flyboard, a jet ski attachment that re-routes its water jets to let users rise out of the water like the love-child of Aquaman and Iron Man. Before long, he'd ditched the jet ski altogether, and moved to jet turbines to create the Flyboard Air, which allowed him to zoom around like the Green Goblin and set all sorts of records, on nothing more than a backpack full of kerosene fuel. He also built an "Ezfly" version with handles, a Segway of the skies for the rest of us, for whom no quantity of brown undies would ever suffice.

The latest vehicle in the Zapata stable builds on this small-turbine technology base but takes things in a new direction. The JetRacer is effectively a carbon-fiber bucket seat that flies on the thrust from 10 of the same small jets that power the Flyboards.

In some senses, it's a fair bit like the small manned multicopter drones that are beginning to pop up here and there – take the Jetson One, for example. The parallels are there in terms of the basic airframe, distributed, redundant propulsion, lots of automation, and a drone-style tilt-to-fly layout, complete with a super-simple and highly automated control system.

The differences are fairly significant, though, starting with the fact that these jet turbines are hideously loud and very hot. And unlike props driven by electric motors, jet turbines can't spool up quickly enough to perform the dozens of tiny corrections every second these types of aircraft need to make to balance themselves in the air. So it seems Zapata has rigged up some kind of thrust-vectoring arrangement under each of the jets, for quick-response adjustments and some pretty crazy agility.

In this respect, it's a little like Mayman Aerospace's Speeder flying motorcycle – although that machine is designed not only to fly on vertical thrust, but to deploy wings for super high-speed horizontal flight well above the 250 km/h (155 mph) Zapata claims the JetRacer is capable of hitting.

Zapata says the JetRacer is designed for civilian as well as military work. Its primary design objective is high speed and maneuverability, even at the cost of a "relatively short range." Its targeted peak altitude is 3,000 m (~10,000 ft), and it's capable of lifting up to 200 kg (441 lb) of person or cargo – the latter under remote or autonomous control.

One thing it can do that we've never seen anyone else in the space attempt is rippin' sick flips. True to his mile-wide daredevil streak, Zapata has built in what we assume is a single-button stunt command, that blasts the JetRacer into a very fast and scary-looking 360-degree roll. This is already up and running on the prototype, as evidenced by the video below – although thankfully there doesn't seem to be anyone in it when this thing flips. We don't imagine it'll be long before Franky's busting out bulk barrel rolls in front of audiences.

Zapata is yet to set out any kind of production or sale schedule, or pricing. Indeed, this device may well remain in the realm of the flight demo for some time. But the company is putting out the call for volunteers to go and have a crack at flying this thing. One hundred people will be drawn for selection tests, which will whittle the list down to 25 people, who'll get the chance to fly the JetRacer in the US at some point. Um, yes please.