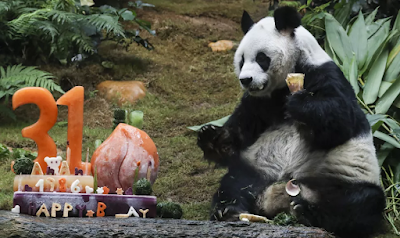 An An, the oldest-ever male panda in captivity, has died at the age of 35 in a Hong Kong

amusement park. The giant panda was euthanized after his health deteriorated over the course of several weeks, according to a statement from the Ocean Park theme park, where An An lived since 1999.

"An An lived a full life that ended at the respectable age of 35 — the equivalent of 105 years in human age," the statement added. "An An has brought us fond memories with numerous heart-warming moments. His cleverness and playfulness will be dearly missed."

The male giant panda was gifted in 1999 to Hong Kong along with a female, named Jia Jia. The two pandas were provided by Chinese officials as part of a "panda diplomacy" program, where giant pandas (exclusively found in China) are leased to other nations, according to the Associated Press (AP).

Jia Jia died in 2016 at age 38, making her the single oldest panda ever kept in captivity. In the wild, pandas typically live 14 to 20 years, according to the World Wide Fund for Nature (WWF). Once captive pandas reach their 20s, they typically stop breeding, at which point they are considered to be "geriatric."

Geriatric pandas are susceptible to a host of health issues, including high blood pressure — an ailment that afflicted An An in his final weeks. According to Ocean Park, An An's food intake steadily declined, while his nap time steadily increased. By July 17, An An had stopped taking solid foods altogether and only drank water infused with electrolytes.

Several weeks after An An was taken off display due to his poor health, a team of vets and panda conservation experts opted to euthanize the giant panda, to prevent further suffering.

Ocean Park is home to two more giant pandas — Ying Ying, a female, and Le Le, a male. The panda pair was gifted to the park in 2007, to celebrate the 10th anniversary of Hong Kong's return to China, according to the AP. Both pandas are 16 years old.