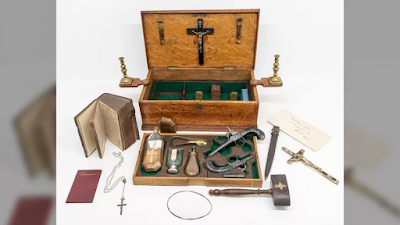 Last week, one auction-goer went home well-prepared to face an encounter with the undead

after buying a "vampire-slayer kit" dating back to the late 19th century. The kit sold for nearly $15,600 (£13,000) — six times its estimated price, after bids came from around the world.

The U.K. buyer brought home a heavy wooden box adorned on its outside with a set of brass crucifixes that slide to unlock the kit. Inside the box is a matching set of pistols, a brass gunpowder flask, holy water, a Bible, a wooden mallet, a wooden stake, brass candlesticks and rosary beads. The box also contains paperwork from the Metropolitan Police, a force that serves the greater area around London, registering an "alien enemy" in 1915.

"The task of killing a vampire was extremely serious, and historical accounts suggested the need for particular methods and tools," Charles Hanson, the owner of Hansons Auctioneers, the auction house that sold the box, said in a statement(opens in new tab). "Items of religious significance, such as crucifixes and Bibles, were said to repel these monsters, hence their presence in the kit."

The kit once belonged to Lord Hailey (1872 to 1969), a British aristocrat and administrator in colonial India. It's unclear whether he actually hoped the kit would help him ward off vampires or whether he, like the kit's most recent buyer, bought it out of fascination, Hanson said.

Vampire mythology dates back thousands of years. Archaeologists have unearthed ancient human remains in Greece that were pinned down with heavy rocks to keep the bodies in their graves, possibly due to a belief that the "undead" could rise again and harm the living, Live Science previously reported. This practice spanned cultures and time periods, including in 16th-century Europe, where human burials had stone stakes in their legs and rocks in their mouths to prevent them from feeding on the living.

People's belief in undead beings likely stemmed from a lack of understanding of communicable disease and the natural physical processes that bodies go through as they decompose, Live Science previously reported. For instance, the liquified remains of the decomposed digestive tract sometimes leak out through the mouth and nose of dead bodies. The dark fluid looks just like blood. In addition, hair, beards and nails continue growing after death, which may have tricked some people into thinking the recently deceased were still alive.

Even during Hailey's lifetime, belief in vampires was alive and well in some places. In the late 19th century, New England had a panic over a vampire when two local women, a mother and daughter, died of tuberculosis, National Geographic(opens in new tab) reported. As the late mother's son, who also had tuberculosis, grew sicker and sicker, townspeople began to believe that the two deceased women were cursing him from the grave — a common belief about vampires, who didn't always leave the ground to prey on their victims, according to early mythology. Around the same time, the Irish author Bram Stoker published his iconic novel "Dracula," keeping vampire mythology alive.

"It's interesting to know a member of the highest aristocratic social order, a man with a place in the House of Lords, acquired this item," Hanson said. "And yet, amid his illustrious career, he was drawn to this vampire-slaying kit. That's understandable. These objects are both curious and intriguing."