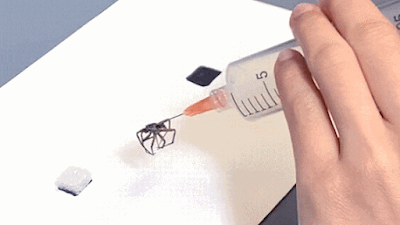 the stuff of nightmares for most people. But scientists aren't most people. Recently, a team of researchers turned the corpses of wolf spiders into arcade-style claw machines that could pick up and move a variety of objects — including other dead wolf spiders.

The idea for the mechanized arachnid grippers, or "necrobots," first came about when researchers noticed a dead spider curled up in a ball in a corner of their engineering lab. After looking up why the legs of dead spiders always seem to end up pulled tightly toward their abdomens, the scientists learned that spider joints were controlled through a hydraulic pressure system that fails when the arachnids die. The team then realized that they could reverse engineer this hydraulic system to hijack the spider's corpse and give it a second life as a machine.

By puffing air into wolf spider cadavers, the team found that all eight legs could be simultaneously straightened out and curled up again to create a grabbing motion that could then be used to lift up objects. Wolf spiders — a group that comprises nearly 2,400 species in the Lycosidae family — can carry objects much larger than themselves and have tiny hairs on their legs that give them extra grip. This means the necrobots could pick up a wide variety of objects, including delicate electrical components, irregularly shaped meshes and, yes, dead wolf spiders, the researchers explained in a new study.

The researchers believe their work could inspire the creation of other necrobots from the corpses or individual body parts of other dead animals. "It's something that hasn't been used before, but it has a lot of potential," senior study author Daniel Preston, an assistant professor of mechanical engineering at Rice University in Houston, said in a statement(opens in new tab).

In humans and other vertebrates (animals with backbones), most joints are controlled by antagonistic muscle pairs, which are opposing muscles that pull a joint in different directions. An example of an antagonistic muscle pair in humans is the bicep and tricep: When the bicep contracts and the tricep relaxes, our arm bends at the elbow; when the tricep contracts and the bicep relaxes, our arm straightens out again.

However, spiders only have a single flexor muscle in their joints that allows them to bend their legs. To straighten their legs again, spiders use a hydraulic pressure system, which involves forcing blood from a chamber near the thorax, known as the prosoma, into the legs. The blood acts as the antagonist to the single flexor muscle and pushes the joint back open. But when the spider dies, there is nothing to push against this muscle, and the joints close.

"When they die, they lose the ability to actively pressurize their bodies," lead study author Faye Yap, a doctoral candidate in mechanical engineering at Rice University, said in the statement. "That's why they curl up."

To transform the wolf spiders into necrobots, the researchers recreated the arachnid hydraulic system, substituting air for blood. The team inserted a needle into the prosoma of a dried-out spider corpse and superglued it in place. When they blew air into the chamber through the needle, the air flow activated the hydraulic system just as a spider's flowing blood would, forcing the legs to straighten. When the air was sucked back out through the needle, the legs returned to their naturally curled-up position.

Normally, spiders control each individual leg through valves that adjust the flow of blood into each limb. The researchers were worried about how this would affect the mobility of their reanimated spiders, as there was no easy way to open the corpses' leg valves. But it turned out that in dead spiders, the valves were permanently stuck in the "open" position, Preston said. This allowed the researchers to control all of a necrobot's legs simultaneously, making them perfect for grabbing objects, he added

The dead wolf spiders were so well suited to their new task that the researchers were able to create a working necrobot on their first attempt. "We took the spider; we placed the needle in it not knowing what was going to happen," Yap said. "And when we did, it worked the first time, right off the bat." It is extremely rare for engineers to succeed so quickly when doing this type of trial-and-error experiment, she added.

Further experiments with the necrobots showed that they could reliably lift objects that weighed more than 130% of their own body weight, and occasionally, they could lift even more. However, after around 1,000 cycles of opening and closing their legs, the necrobots became less efficient and showed signs of damage.

"We think that's related to issues with dehydration of the joints," Preston said. However, the researchers think they can eventually overcome this problem by coating the legs with special polymers, which would extend the life span of the necrobots, he added.

The necrobots have a wide range of potential applications, according to the statement. The team has already shown that the spider grippers can be used to move fragile components in electrical circuits without damaging them, which hints at their usefulness for assisting in the assembly of microelectronics and other small-scale construction projects. And if the scientists can replicate their work with other species, that could further extend the range of projects that could benefit from a necrobot's delicate touch, the team reported in the study.

Ecologists also could utilize necrobots to collect live insects to study from the wild without damaging them, Yap said. The reanimated spiders are likely to be highly effective tools for capturing insects because their legs have evolved specifically to catch tiny arthropods, and their natural camouflage could help keep them hidden in the field, she added.

Using necrobots instead of mechanical constructs made of metal and plastics  could also help to reduce the waste produced during tool manufacturing. "The spiders themselves are biodegradable," Preston said. "So we're not introducing a big waste stream, which can be a problem with more traditional components."

Wolf spiders are extremely common, widespread and easy to collect, so there would be a cheap and plentiful supply of spider corpses for engineers to transform into necrobots — as long as those engineers aren't arachnophobic, that is.

The study was published online July 25 in the journal Advanced Science(opens in new tab).