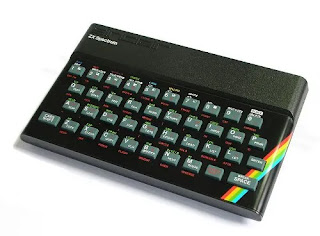 Today marks the 40th anniversary of a truly important date in computing history: the release of the ZX Spectrum.

However, in the United Kingdom at least, the Spectrum was arguably a more important first: the first computer where children primarily conned parents into buying it “to help with homework” but in fact used it mainly for games.

To give the release some historical concept, the Spectrum was born out of the rivalry between Clive Sinclair (developer of the ZX80 and ZX81) and former partner Chris Curry (who won a license from the British Broadcasting Corporation to create a branded machine for use in schools.)

Coming just a few months after the BBC Micro, the Spectrum thrived despite not having the BBC backing and publicity. The original model came in 16kB and 48kB versions. It is probably best remembered for its keyboard: instead of the flat keys of the ZX81 or the “normal” keyboard of the BBC, the original spectrum had rubber keys that resembled those used on remote controls.

To help with programming, each key was not only used for a letter or number, but also as a symbol and a shortcut for typing two different programming commands. Several keys also set a color and a screen command, meaning those keys performed six separate functions, each labeled on the keyboard.

It was games that really made the Spectrum however, creating something of a virtuous circle. The range of games made it a popular machine with users, which in turn encouraged developers to make more games. The relative limitations of the computer meant creativity and originality could arguably overcome budget, and there are countless stories of “bedroom programmers” releasing games and competing with major companies in finding an audience.

Every Spectrum user has nostalgic stories. Barely a visit to my in-laws goes by without mention of the sheer horror of typing in program listings from a specialist magazine for several hours only to discover a single typo had made the whole affair a waste of time.

Such problems later led to magazines giving away games on cover-mounted cassettes (audio tape being the way to load a program on the early models), though this could be problematic for titles using thin paper covers that could easily tear under the weight. A later solution was for magazines to affix a flexidisc, a very thin vinyl record that the buyer would copy across to cassette on their stereo system.

Of course, home stereos with a twin tape deck proved a simple way to copy commercially released games leading to a variety of creative anti-piracy measures. One involved the game asking players to type in the letter that appeared on a specific word on a specific line on a specific page of the instruction manual. Another involved a printed grid included in the packaging, with players asked to say which color appeared in a particular square. The use of color meant simply photocopying the grid was out of the budget of most players at the time, though determined pirates would simply write out a list of every square and color by hand.

My own favorite personal Spectrum memory serves as evidence that the computer really did prove educational at times. It involved Daley Thomson’s Decathlon (a character-based variant on Track and Field), in which controlling running simply involved either hammering two keys alternately or waggling a joystick from side to side.

It turns out that if you have a joystick with suckerpads, a glass table, and a friend whose parent is out at work during the summer vacation, physics becomes your friend. Player one lifts up the joystick, still attached to the table; player two rapidly lifts one end of the table up and down; and leverage does the rest.